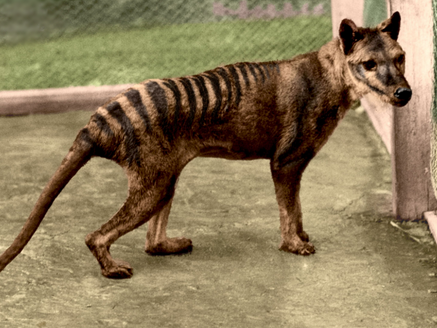 Eighty years ago this week, the Thylacine, commonly known as the Tasmanian tiger, was set to become protected, following mass killings of their species.

Unfortunately, this protection came too late, as the last of its kind, a Tasmanian tiger named Benjamin, died in his enclosure at the Hobart Zoo.

A bounty system was introduced in 1830 which offered farmers money for each adult and joey killed. The animals were hunted as prized trophies until the bounty was ended in 1909. This encouraged the massive killing which resulted in a rapid deterioration of the species.

In 1928, the Tasmanian governor, Sir Ernest Clark, placed the rare marsupial onto a list of endangered species. Benjamin, who was left to die out in the cold at the zoo, ironically passed away only three months after this decision was announced, and the species was declared to be extinct.

Thylacine had once roamed the Australian mainland prior to the British settlement of the continent and the introduction of the Dingo.

September 7, 1996, the 60th anniversary of the last Tasmanian tiger’s death, was declared ‘National Threatened Species Day’. The day has been set aside for reflection as to how Australian citizens can work to protect threatened species.

There are currently 41,415 species on the IUCN Red List, and 16,306 are endangered species threatened with extinction.

A woman is accused of throwing a cat off a third-floor balcony in an incident that was captured in a video posted on social...
Read more
News

Endangered North Atlantic Right whales have experienced a shocking number of fatalities in 2017, causing alarm among biologists and conservationists for their depleting population...
Read more
News

l214.com The trial began today for the founder of the French animal rights organization L214, Sébastien Arsac, and another member who has sadly been charged...
Read more
Load more