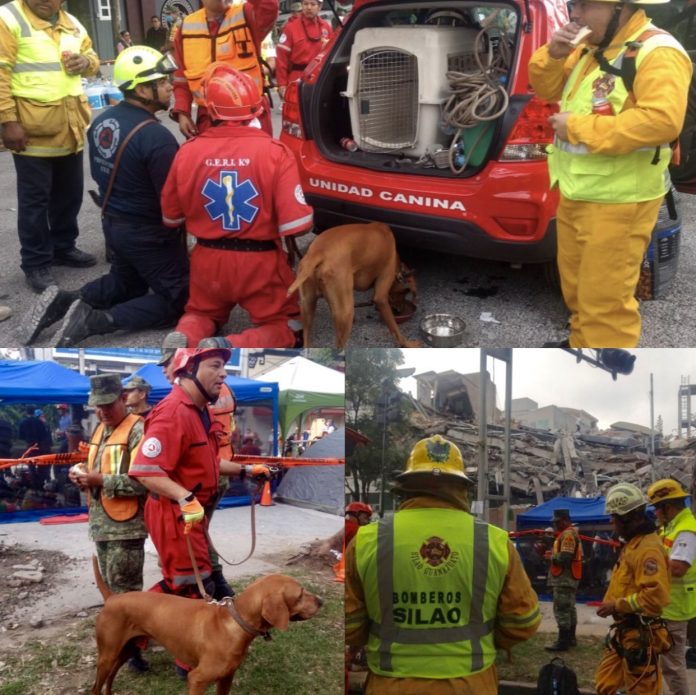 The incredible search and rescue dog named “Titan” who is a member of the fire company of Silao has rescued at least 21 people in yesterday’s devastating 7.1 magnitude earthquake in Mexico City.

Per Milenio News, Titan arrived yesterday in Mexico City with firefighters but in commemoration of the earthquake that happened in Mexico City in 1985. The 1985 earthquake struck in the early morning of September 19th with a magnitude of 8.0. The event caused serious damage to the Greater Mexico City area and the deaths of at least 5,000 people.

Titan and his handler Mauricio Pantoja never imagined that there would be another earthquake on the same day they would be commemorating the travesty of the 1985 Mexico City earthquake.

When the earthquake happened yesterday afternoon, they immediately began to work to save the people trapped in the rubble. More firemen joined from the corporation of Silao to help later in the night. Titan and his handler searched through the crumbeling buildings that collapsed leaving 200 people dead.

As reported by the staff of the municipality of Silao and the fire company, currently Titan is doing work to locate two more people in the quake’s aftermath.

Thanks to brave search and rescue dogs and their handlers, many more lives will be saved from the devastating earthquake that hit Mexico City yesterday.

Seven days after WAN reported that the Trump administration unfathomably reauthorized the use of sodium cyanide in wildlife-killing devices called M-44s, comes news that the...
Read more
News

Josue Santiago is accused of removing dozens of exotic animals and staging a burglary at a wildlife sanctuary. (Miami-Dade Police) An arrest has been made...
Read more
News

Angelina Jolie is much more than just a beautiful actress who does charity and philanthropy work in her spare time; she walks the walk and...
Read more
Load more