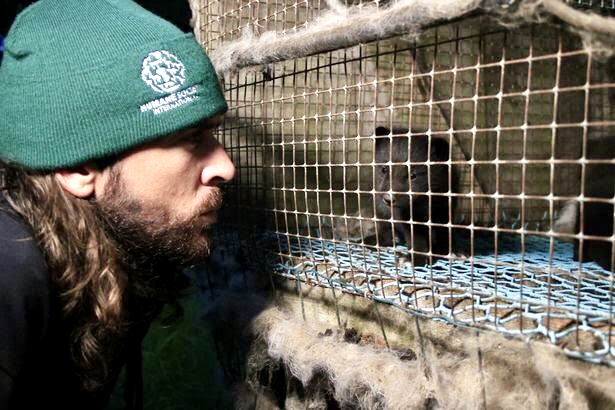 A new undercover investigation by Pete Wicks from TOWIE’s and animal welfare organization Humane Society International/UK revealed deplorable conditions and distressing animal suffering on fur farms in Finland, a country that exports millions of pounds worth of fur to the UK. The investigation by HSI/UK in partnership with Finnish animal protection organization Oikeutta Eläimille found tiny fox cubs struggling to walk across wire mesh cage floors, dead animals among the living, and others suffering with untreated wounds.

Pete Wicks recorded an emotionally-charged video for his fans showing footage from the farm. Pete told fans that fur farms are far worse than he ever imagined, and called the fur trade “cruel and disgusting.” Pete urged his followers not to buy fur, and shared HSI’s petition calling on the British government to ban fur sales in the UK.

The UK banned fur farming in 2000 on ethical grounds, but since then has allowed imports of more than £820 million worth of fur from overseas, including Finland. Since the ban, the UK imported more than £14 million worth of fur from Finland, and HM Revenue and Customs figures also show sizable imports from a range of other countries such as: Italy, France, Poland, China and Russia. In 2019 so far fur imports to the UK total £25.7million, including over £2.5million from China alone. Finland is by far the biggest ‘producer’ of fox fur in Europe, rearing and electrocuting around 2.5 million foxes every year for the global fur trade; only China farms more foxes globally.

The fur trade claims that the majority of fur farms in Finland are so-called ‘high welfare,’ so HSI campaigners took celebrity supporter Pete Wicks to Finland to see for themselves. They found distressing animal suffering across all 13 of the fur farms visited between April and October 2019, with Pete accompanying them to two of those farms.

“Despite having seen lots of fur farm footage, nothing could have prepared me for the suffering I saw when I investigated fur farms in Finland with HSI/UK. It was sickening, I really don’t believe that anyone who has seen the state of these poor animals, terrified and trapped in tiny cages, would ever wear fur again,” Wicks said in a statement. “It is great that the UK banned fur farming, but it doesn’t make sense that we’re still selling fur from farms like the ones I visited in Finland. So I hope this new footage will help HSI/UK’s #FurFreeBritain campaign to persuade politicians that fur cruelty should be banned from UK shop shelves.”

UK fur imports are a double standard that HSI/UK through its #FurFreeBritain campaign is urging the government to address by introducing a ban on UK fur sales.

“We saw a few hundred of the millions of foxes and mink trapped in miles of battery cages in Finland. These poor young animals exist only as vessels for their fur, as broken and tormented souls suffering to provide a frivolous product that the fashion industry does not need,” said Claire Bass, Executive Director of Humane Society International/UK, who investigated the fur farms. “It’s important for consumers, designers and politicians to witness the awful reality, that despite what the fur trade tries to portray on catwalks, there is nothing glamorous about fur. As long as the UK allows British businesses to trade in fur, we are complicit in the cruelty. Britain was the first country in the world to ban fur farming, now it’s time for us to finish the job and become the first country in the world to ban fur sales as well.”

“During my work as an investigator, I have visited almost a hundred fur farms in Finland and other countries. Sadly, the appalling things we witnessed on the investigation with HSI/UK are far from the exception. Small, barren cages, and suffering of the animals are the norm in the fur industry,” stated Kristo Muurimaa of Oikeutta Elaimille, who accompanied HSI/UK on the fur farm visits.

HSI’s petition calling for the UK government to ban UK fur sales can be signed HERE!

Sign Petition To Find & Prosecute The Person Or Persons Who Killed A Pregnant Dolphin In Mississippi; $13K Reward If Arrest Is Made

When most people see a dolphin, their hearts fill with joy. Apparently, that was not the case for the heartless person who pulled out a gun and shot an innocent...
Read more
News

The rescued duckling was reunited with its mother and siblings. Photo from the Good News Shared WAN learned about a rescue story with an important...
Read more
News

Visiting our friend Marilyn Darby in Utah, who dedicates her life to rescuing orphaned baby deer who's mothers were either hit by cars or...
Read more
Load more