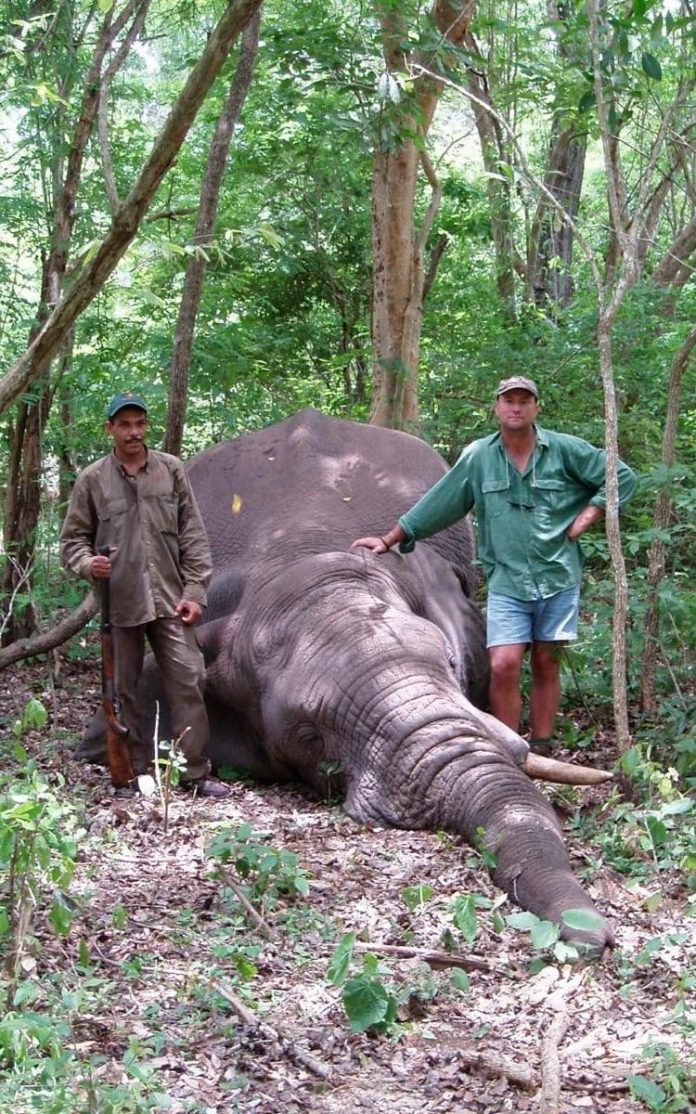 Theunis Botha, 51, A South African big game hunter died this weekend after being crushed by a female elephant that was shot on a big game trophy hunting reserve in Zimbabwe, according to The Telegraph.

The avid trophy hunter was with clients who he was leading on a hunt when they stumbled into the middle of a breeding herd of female elephants at the Good Luck Farm near Hwange National Park late Friday afternoon, Zimparks spokesman M. Simukai Nyasha said.

Three of the female elephants charged the hunters. Botha fired a shot but was caught by surprise by a fourth female elephant that stormed his group from the side, the Afrikaans news site Netwerk24 reported.

One of the female elephants lifted Botha off the ground with her trunk and was tragically shot by another hunter who was with Botha at the time. She sadly passed away as a result of the rifle shot.

The female elephant who was likley very protective because she was in heat or trying to protect her young, collapsed and crushed the trophy hunter leading to his death.

Botha used hounds in his hunting escapades and specialized in killing leopards and lions for so-called “sport.”

According to The Telegraph, he would also travel to the U.S. in search of wealthy canadates to come on his trophy hunting excursions to tragically kill more exotic animals in South Africa for “fun.”

The name of his trophy hunting company was Game Hounds Safaris out of South Africa.

We hope as a result of this tragedy of the female elephant that was shot and killed and Botha’s karmatic death, that his company will no longer promote trophy hunting with this very important lesson learned. Leave animals alone in the wild, let them live in peace, free, without fear of being killed for the so-called “sport” of trophy hunting.

Botha leaves behind five children and a wife.

Trophy hunting must be banned across the African Plains before many of our endangered species will no longer exist in the wild. It is our job to be the voice of the rapidly disappearing species in Africa and across our planet to protect them before it’s too late!

In Honor Of Packy, The Elephant Unnecessarily Put Down By The Oregon Zoo, World Zoothanasia Day Has Been Declared

In recognition of Packy, the 54-year-old Asian elephant that was recently put down by the Oregon Zoo, as well as countless other animals who...
Read more
News

Photo from Humane Society Internation A South Korean court has reportedly ruled that the killing of dogs for meat is illegal. While the ruling doesn’t make...
Read more
News

The amazing organization Vervet Forest Rescue is working on a documentary set to be released in 2017, which follows the lives of five orphaned...
Read more
Load more