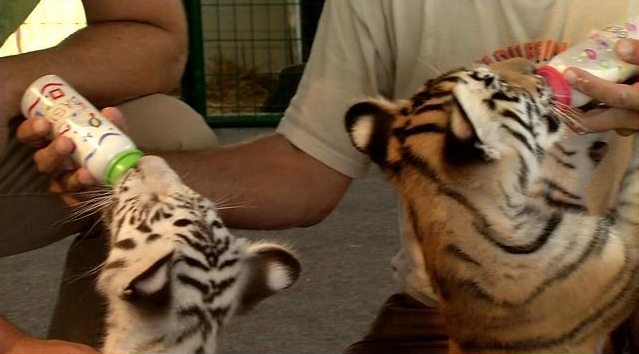 True Sanctuaries Do Not Breed Their Animals

Not everyone is aware that an animal sanctuary that breeds their animals is nothing more than a roadside zoo, masquerading as a “sanctuary”. One sanctuary in particular in question, is the Charlestown Sanctuary in Indiana, called Wildlife In Need.  Here are a few facts about this facility that everyone should be aware of. Wildlife In Need breeds their big cats for photo opportunities and monetary gain. The so-called “rare” species the owner of Wildlife In Need breeds, the white or golden tabby tigers are not a separate species at all – they’re color mutations of the Bengal tiger, and usually have severe health problems from the inbreeding required to produce them (which is why zoos, accredited by the AZA, do not breed or display them).

True sanctuaries DO NOT BREED animals, they rescue them and raise funding usually as a non-profit to care for them. The type of breeding conducted at Wildlife In Need cannot legitimately be called “conservation” when you are breeding tigers for profit. Breeding endangered tigers in captivity does nothing to improve the species gene pool or increase wild tiger populations. There are currently less than 3,200 tigers remaining in the wild. The cute little cubs bred for visitors to take photos of are often sold to other roadside zoos when they get too big to handle. They often end up in very poor conditions, and in some cases, even end up being slaughtered and sold for the black market trade of endangered species.

This operation of breeding tigers in captivity is irresponsible – possibly even illegal. The owner of Wildlife In Need’s USDA inspection reports, which are publicly available and record how well a facility complies with the Animal Welfare Act, found that the owner lied about having a veterinarian on board and had two young leopards die without seeing a vet, failed to keep acquisition and disposition records (a red flag for illegal trafficking), and provided animals no shelter from the heat, among other violations. He even plead guilty to illegally trafficking an endangered Ocelot.

The USDA has filed a formal complaint against Wildlife in Need in Clark County that had been under investigation for months.  The News and Tribune reports that the complaint filed by Animal and Plant Health Inspection Service administrator, Kevin Shea, lists more than 20 allegations, in which, Wildlife In Need owner, Tim Stark, violated the Animal Welfare Act.  According to the complaint, this facility most recently housed 124 animals, including 25 primates and 97 wild or exotic mammals.

A recent video captured at a “tiger taming class” held at the facility even shows the owner telling guests to “treat the damn tiger (cub) like you’d treat a damn dog – smack him in the nose”. He then deliberately holds the tiger cub in a way that makes it uncomfortable to demonstrate what a “pissed-off tiger” looks like, then hits it when it resists. All the while making snide (and very profane) comments about how the government doesn’t like what he’s doing. If this man truly “loves animals”, he has a very unusual way of showing it, with animals at risk. Everyone needs to be aware of these so-called “sanctuaries’ and the fate of these poor endangered species.

Photo by Michael Van Woert, NOAA. The Center for Biological Diversity sued the Trump administration recently for failing to act on a petition to protect emperor penguins...
Read more
News