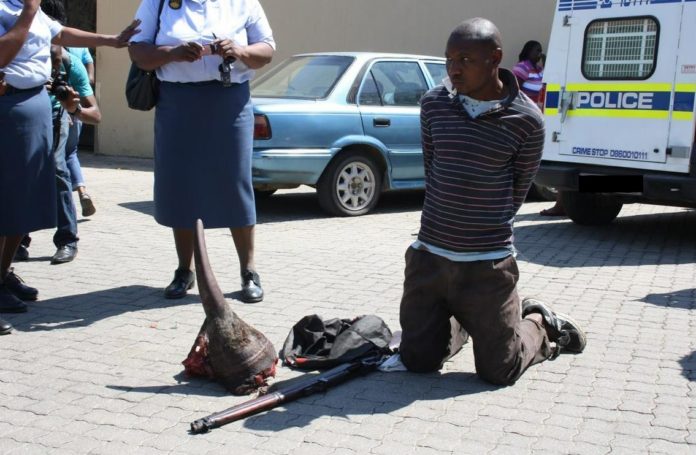 Twelve suspected rhino poachers have been arrested in and around South Africa’s flagship Kruger National Park since the beginning of the month.

They were nabbed by officers from Operation Rhino 7‚ a multi-disciplinary task force deployed to curb rhino poaching throughout the country.

South African Police Service Spokesman Brigadier Vish Naidoo said the suspects‚ aged between 22 and 35 years‚ have been charged with possession of illegal firearms and ammunition‚ possession of suspected stolen vehicles‚ trespassing in a national park‚ and possession of dangerous weapons.

Frans Mfuku‚ Kelemi Mbombi and Buja Mashele‚ whose nationalities are yet to be determined‚ appeared at Skukuza Magistrate’s Court on January 31, 2017 Their case was postponed to February 22, 2017.

Bruce Mpofu‚ a foreigner whose nationality is still yet to be determined‚ and South Africans Thembelani Ndlovu‚ Nobuhle Xaba‚ Amanda Dlamini and Sandile Ntuli also appeared at the White River Magistrate’s Court. They will appear again in court on February 16, 2017.

Their cases were postponed for formal bail application and verification of physical addresses.

The World’s Oldest Living Panda, Jia Jia Has Passed Away at 38

Very sad news today, as Jia Jia believed to have been the oldest living panda ever in captivity, has died at the age of...
Read more
News

Photos From Sale Ranch Animal Sanctuary In the spirit of National Help A Horse Day, which is recognized on April 26th each year, WAN wants...
Read more
Featured Animal Spotlight

Photos By National Park Service A pair of golden eagle chicks, a fully protected species in the state of California, have been found in a nest...
Read more
Load more