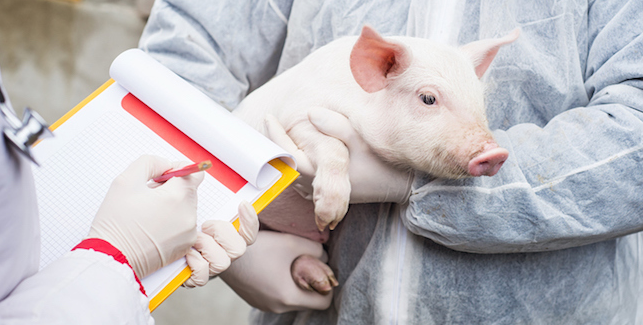 It’s been a long, hard battle, but we won. To be more precise, the animals won. The last remaining medical school in the United States and Canada using live animals to train its students announced it will stop doing so immediately.

The nearly 32,000 who signed a Care2 petition on this issue will be thrilled to learn that the University of Tennessee College of Medicine in Chattanooga (UTCMC) will no longer use live animals to teach surgical technique to is medical students. Public pressure clearly influenced this decision, demonstrating yet again what well-organized pressure from animal advocates can accomplish.

Johns Hopkins University made the same announcement in May 2016, leaving UTCMC as the last school using animals as live teaching props. Having all eyes pointed at this one school made this choice to change a fairly urgent public relations concern, apparently. UTCMC made its announcement on June 24, 2016.

At the forefront of this success is the Physicians Committee for Responsible Medicine (PCRM). This non-profit organization representing more than 12,000 physicians has worked for years to stop the use of live animals to teach surgical skills to students. Indeed, when it decided this practice must end, the dean of UTCMC announced the change by emailing its announcement to PCRM.

“With the decision by leaders at the University of Tennessee College of Medicine to eliminate animal use in the Surgical Skills Laboratory, we are entering the post-animal era in medical student education,” said Dr. John Pippin, director of academic affairs at PCRM, in a press release.

In years past, medical students had to participate in mandatory laboratory sessions using live animals like dogs, pigs, sheep and goats. They learned to perform various highly invasive procedures on them, such as incisions and suturing techniques, organ removal, airway management, traumatic injury treatment, emergency procedures and drug injections.

When it was over, the schools euthanized the unfortunate animal subjects. The animals lived and died only to serve as fungible teaching tools. By the way, how do you think those traumatic injuries got there in the first place? Don’t think too long — you know the answer and it’s heartbreaking.

“[Animals] are inadequate and often misleading stand-ins for humans,” said PCRM in its press release. “Training students with animals also gave trainees the false impression that the use of animals was fundamental to the field of science.”

Eventually, more and more medical schools realized what PCRM has been saying for years. Human and non-human physiology are different. What’s effective treatment on a pig or a dog isn’t necessarily effective on a human. Sometimes, it’s demonstrably not similar at all.

Even if animals and humans respond to treatment in exactly the same way, there are now impressively accurate human patient simulators that make using animals completely unnecessary. As this fact became apparent, one by one medical schools stopped using live animals. The fact that it took this long to get all U.S. and Canadian medical schools to drop animal use is shameful.

That’s all in the past, though. Be happy — a years-long campaign to do right by animals achieved its goal. Bask in the satisfaction of a successful outcome.

“Like Johns Hopkins University a month before and numerous other medical schools before that, the University of Tennessee has acknowledged that simulation and other non-animal teaching methods have supplanted the cruel and unnecessary use of live animals in the training of physicians,” Pippin said.

Any animal lover who ever signed a petition or held up a sign in front of a university medical school — this victory is yours. You made a real difference for animals in this world. Thank you for your activism and your persistence. It wouldn’t have happened without you.

A Good Egg? The Egg Industry Exposed – The Facts They Don’t Want You To Know!

Most of us grew up eating eggs. Whether it was for breakfast or just a quick snack; scrambled eggs, fried eggs, boiled eggs, poached...
Read more
Breaking News

The U.S. Fish and Wildlife Service (USFWS) finalized a rule today that removes protection from gray wolves in the lower 48 states, except for a small population of Mexican gray...
Read more
News

Animal advocates are demanding that the Edmonton International Airport stop sending live horses to Japan for slaughter. As of this morning, 84,805 people have signed...
Read more
Load more