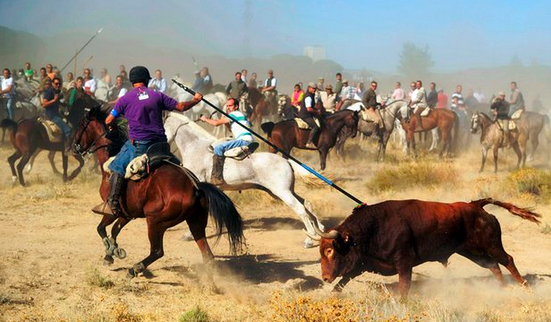 A historic victory for animals was announced in Spain:  The region of Castile & Leon has banned the Toro de la Vega “festival” during which men compete to spear a bull to death.

Regional authorities simply refused to grant a license to the medieval town of Tordesillas for the event, as parliament recently banned the killing of animals for the purpose of festivals. However, bullfighting by “professionals” is still legal.

Luis Víctor Moreno, the vice-president of PACMA, an animal rights organization: “There is no way back now. Spain must continue along the path of becoming part of civilized Europe where animals are not killed and tortured for amusement.” He promised to “remain vigilant for any ruses they might use to hold the festival and any attempt to harm the bull”, as he expects that such an event may take place in Tordesillas on September 13th.

The Toro de la Vega festival, which has a 500-year history begins as the bull is run through the streets of the town. Once it reaches the area outside the town, those with spears compete to kill the animal.

Moreno continues: “This year, the difference is that the police will be there to prevent the bull being killed and (will) not stop the protest.” 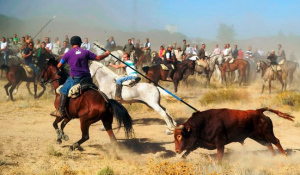 World Animal News and its non-profit organization, Peace 4 Animals (peace4animals.net), have put the pedal to the metal in promoting the welfare of animals and...
Read more
News

New Bill Would Require The California Department Of Fish And Wildlife To Adopt Regulations To Prevent Whales & Sea Turtles From Becoming Entangled In...

Nonhuman Rights Project Fights To Save Minnie, A 48-Year-Old Elephant From The Commerford Zoo After Claims That They Can No Longer Care For Her