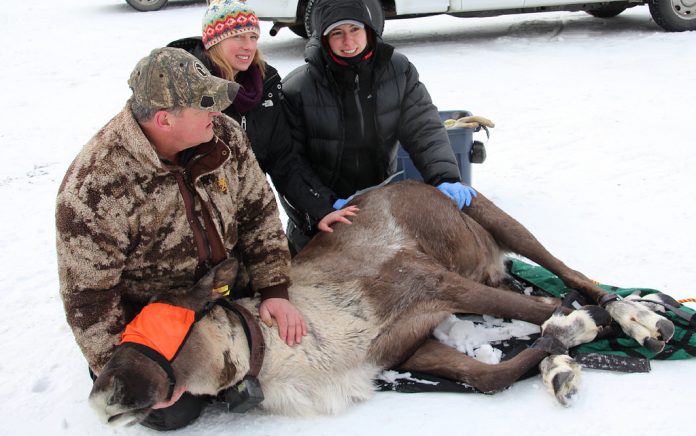 WAN Exclusive; Only 6 Caribou That Are Facing Extinction Remain From 2 Herds In British Columbia, Government Is Working To Save Them

A sedated caribou cow is relocated to the Revelstoke pen. Photo from B.C. FLNRO.

Of the 54 herds of woodland caribou that currently roam the southern mountains of British Columbia, sadly, two are at risk of extinction, as there are now only six remaining animals among them.

The single remaining South Selkirk cow and one cow and one bull from the South Purcells herd, were moved to a holding facility near Revelstoke to protect them from predators. 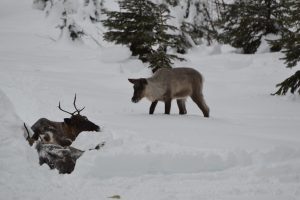 Grace, the lone youngster in the Revelstoke caribou pen, approaches the newly arrived individuals as they wake from sedation. Photo from B.C. FLRNO.

“Last week, we were only able to capture and move three of the remaining caribous from the threatened herds. We were not able to retrieve the other three,” Makarowski told WAN referring to the two bulls and one male yearling in the South Purcells that could not be captured safely. “The relocated animals will stay at the holding facility, giving the best chance for survival, until they are able to be released into the wild.”

All three captured animals are in good condition. The hope is that these animals will be able to join the Columbia-North herd, which has an estimated population of 147 animals. They will be closely monitored to determine the right time to release them back into the wild.

The B.C. government is upholding its commitment to protect caribou populations. As per a statement from the department of Forests, Lands, Natural Resource Operations and Rural Development, the number of caribou in British Columbia has been in decline over the past century, from approximately 40,000 animals, to a current estimate of about 15,000.

As per the department’s website, all caribou in British Columbia are woodland caribou and are comprised of 54 herds or subpopulations: the southern mountain, central mountain, northern mountain, and boreal.

Previous articleFather Sentenced To Only 3 Months In Jail After Killing Mother Bear and Her Newborn Cubs, While Son Only Receives 30 Days Suspension
Next articleSocial Compassion In Legislation & Center For Biological Diversity Call For Statewide Ban On Fur Trapping & Introduce Assembly Bill 273

Sandra Bullock and Leonardo DiCaprio are among the many high-profile celebrities donating to the critical relief efforts for those, both human and animal, that...
Read more
News

The ASPCA recently announced a groundbreaking, multi-year initiative to significantly improve the quality of life for some of the most vulnerable animals in New...
Read more
News

A federal bill that aims to end the private possession of big cats such as tigers, lions, leopards, and pumas as pets, as well as...
Read more
Load more