WATCH: Amazing Bond Between Harry The Koala And His Caretaker Goes Viral

Harry, a baby koala from The Symbio Wildlife Park in New South Wales has fallen in love with his caretaker Tami Wilson, after a video of them playing together went viral.

Harry seems to have a very special bond with Wilson, as he runs down from his tree and jumps on her lap to greet her every time he sees her.  Harry can’t get enough of his daily belly rubs and cuddles. 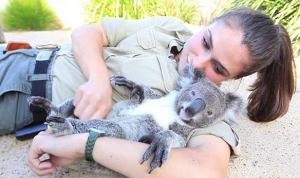 Millions of people from around with world have viewed the heartwarming video of this one of a kind loveable baby koala.

Harry was orphaned after his mother died tragically of leukemia and a surrogate koala mother would act as Harry’s parent until he gains more strength and can survive on his own.

The koalas now live in a new breeding sanctuary of the wildlife park, which started in 2014. They have designed the sanctuary into two large exhibits which have a lot of space in order to house more koala families. It gives the koalas a natural environment where they’re protected because of their critical status as an endangered species.

Breaking! As Wolves Continue To Be Unfairly Killed In Washington, Governor Jay Inslee Puts A Stop To It & Calls For Non-Lethal Solutions

Being the proud mama of a four-legged 14-year-old baby girl that was dumped by a so-called "breeder" on the street when she was sick,...
Read more
News