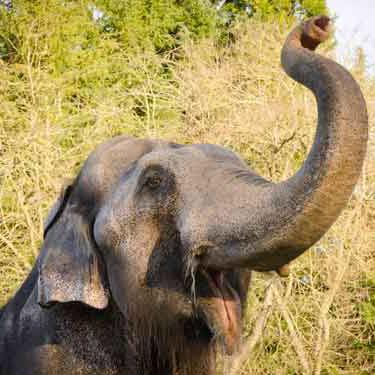 In Honor Of Packy, The Elephant Unnecessarily Put Down By The Oregon Zoo, World Zoothanasia Day Has Been Declared

In recognition of Packy, the 54-year-old Asian elephant that was recently put down by the Oregon Zoo, as well as countless other animals who unnecessarily lost their lives at zoos, February 9, 2017 has been declared World Zoothanasia Day by international animal welfare organization In Defense of Animals and Dr. Marc Bekoff.

Coined by Bekoff, professor emeritus of Ecology and Evolutionary Biology at the University of Colorado, Boulder, Zoothanasia refers to the killing of “surplus” animals because of age or genetics. Sadly, Marius the giraffe and the lions of Copenhagen Zoo were also recently extinguished under this unfathomable standing operating procedure.

Believed to have been the oldest remaining male elephant of his kind in North America, Packy was apparently healthy when he was murdered; though he had been diagnosed with tuberculosis in 2013.

“Packy has never shown any signs or symptoms of the TB infection,” reported a zookeeper who cared for the rare elephant describing him as having been extremely active and playful.

Posting anonymously on an exclusive “Team Packy” Facebook page, he explained, “this decision is not based on science, safety or Packy’s best interest. It is a risk based decision made by politicians, attorneys and other officials who fear the future repercussions of keeping him alive.”

Not surprisingly, Oregon Zoo ranked as the fifth worst zoo for elephants in North America on In Defense of Animals’ 2016 list; making it the seventh time it has been called out on the annual list.

“We are devastated by the horrific news that Oregon Zoo has murdered Packy,” said In Defense of Animals President, Dr. Marilyn Kroplick. “Oregon Zoo brought Packy into the world and profited from him for decades. He was not suffering, and risk management plans were working, yet they killed him anyway. This is a truly sickening betrayal of a highly self-aware and conscious individual. We demand that the five remaining elephants at Oregon Zoo are freed and retired to a sanctuary where they can receive genuine care and respect.”

“I am sickened by the despicable actions of Oregon Zoo, which has not ‘euthanised’ but ‘zoothanised’ Packy,” added Toni Frohoff, Ph.D., Elephant Scientist for In Defense of Animals. “The Zoo admitted that Packy was not suffering, so ‘euthanasia’ is a flat-out lie. Packy wanted to live and the people who raised him and whom he trusted murdered him. In Defense of Animals is demanding that the Oregon Zoo show some accountability and immediately produce Packy’s clinical veterinary records as well. In the meantime, the Zoo has no right to attempt to whitewash this murder as ‘euthanasia.’”

In Defense of Animals wants the Oregon Zoo and Metro City Council to be held accountable. The following are ways it suggests people can help put pressure on them such as: Sending letters and emails to or calling the Oregon Zoo’s Director, Don Moore at 503-220-2450 and Metro Council President, Tom Hughes at 503-797-1989. Thank you for your help!

Victory! Ann Arbor, Michigan, Becomes The First U.S. City In The Midwest To Ban The Sale Of Fur

The city council for Ann Arbor, Michigan, voted unanimously to ban the sale of new fur products, making it the first city in a fur-producing...
Read more
News

News & Observer The Center for Biological Diversity announced last week that it had added $10,000.00 to the reward for information leading to a conviction or...
Read more
Load more