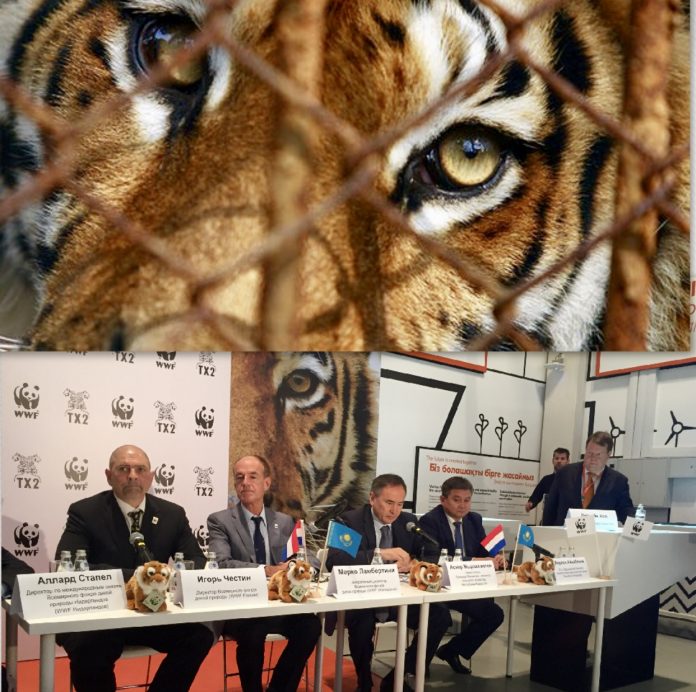 A signing ceremony took place last Friday marking the beginning of the return of wild tigers to Kazakhstan more than 70 years after they became extinct due to habitat loss and uncontrolled hunting and poaching.

Referred to as “the most ambitious conservation effort ever attempted for a single species,” the Republic of Kazakhstan signed a memorandum with World Wildlife Fund (WWF) to implement a joint tiger reintroduction plan.

The reintroduction will contribute to Tx2, an initiative launched by WWF to collaborate with 13 of the world’s tiger range countries, including Bangladesh, Bhutan, Cambodia, China, India, Indonesia, Lao PDR, Malaysia, Myanmar, Nepal, Russia, Thailand and Vietnam, to double the wild tiger population by 2022; the next Chinese year of the tiger.

“We applaud the Republic of Kazakhstan for the vision and leadership shown in embarking on a most ambitious and exciting conservation challenge to bring back this majestic predator to the country,” Marco Lambertini, Director General of WWF International said referring to Kazakhstan becoming the first country in Central Asia to implement such a monumental and large-scale program. “This is a major contribution to securing a future for tigers in the wild and also a critical step toward protecting the Ili-Balkhash region for its unique biodiversity and important natural systems that people rely on.”

The program designed to reintroduce wild tigers to their ancestral home in the Ili-Balkhash region requires the government of Kazakhstan to restore the unique riparian forest habitat that is adjacent to Lake Balkhash.

Restoring tigers will also help protect Lake Balkhash, one of Asia’s largest lakes and an important source of water in the Ili River basin, and prevent it from repeating the fate of the Aral Sea, formerly the world’s fourth largest lake and now 10 per cent of its original size.

The reserve will protect existing wildlife, reintroduce tiger prey species, such as the currently extinct endangered wild donkey and Bactrian deer that are native to Central Asia, and safeguard the vital ecosystem.

According to WWF, while other relocation and reintroduction efforts have been made in areas where tigers are already believed to exist, this will mark the first time a country has attempted to reintroduce them to an area where they have gone extinct.

At the beginning of the 20th century, there were believed to be 100,000 tigers living in the wild but tragically, as per WWF, the world tiger population is now estimated to be at an alarmingly low 3900, according to best available data.

“The Tx2 commitment is the best chance we have at securing the future of wild tigers and their habitats,” Mike Baltzer, Leader of Tigers Alive, WWF, noted on the organization’s website. “Tigers may not get a second chance in the wild, and neither may we.”

There are many ways people throughout the world can help save iconic tigers from extinction, several are available HERE!

Please Sign The Care2 Petitions Below To Help Protect Tigers In The United States!

Reflecting broad public support for big cat protection, the U.S. House has introduced Big Cat Public Safety Act, H.R. 1818. The bill would bring an end to the private ownership of dangerous wild cats, which would protect these amazing animals and people.

Ask Congress To End the Suffering of Wild Animals in Traveling Circuses for Good. HERE!

Photos By: WildArk For the first time in 3,000 years, the Tasmanian devil is back in the wild on mainland Australia, a historic moment that...
Read more
Industry News