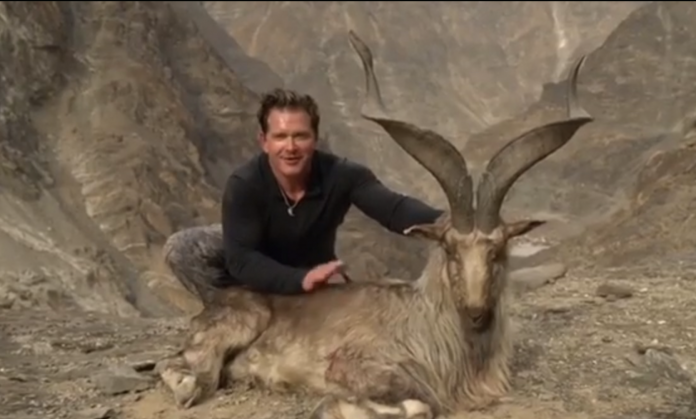 Yet Another American “Trophy” Hunter Boasts About Killing A Rare Goat In Pakistan; END TROPHY HUNTING!

Sad news from Pakistan as WAN has learned that yet another American trophy hunter, identified by local media as Bryan Kinsel Harlan, is touting that he “was pleased to take his ‘trophy,’” while falsely claiming “CONservation” among the reasons he paid USD$110,000 for the hunt.

A video recorded in Gilgit, captured Harlan shooting a male Astore Markhor that was next to a young goat, and then high-fiving members of his hunting team.

Unfathomably, the news comes less than one month after WAN reported on a tragically familiar incident of a Markhor, Pakistan’s national animal, senselessly killed at the hands of an ego-driven subhuman who hunts and kills innocent animals for so-called “sport.”

This is appalling, especially since there are only an estimated 6,000 of these rare goats remaining in the wild. They are supposed to be protected by local and international laws under the Convention on International Trade in Endangered Species, left living in the mountains of Pakistan and Afghanistan.

As previously reported by WAN, although hunting the Markhor is illegal in Pakistan, the government has introduced a “scheme” which makes the hunt legal. The scheme is known as trophy hunting.

Harlan, reportedly a Texas entrepreneur, paid the record sum to obtain one of the limited permits to hunt the animal.

As noted by WAN, there were reports last month that permits were also granted to another American trophy hunter who recently killed his fourth Markhor, as well as to a tourist from New Zealand.

These hunting expeditions are reportedly monitored by village representatives, as well as government officials, to ensure that laws are not broken.

What? Ensure that laws are not broken? Remember the part about the “scheme” called trophy hunting….

Without the appalling human conflict, the endangered animals, also known as screw-horn goats, are estimated to live between 10 to 12 years in the wild.

A groundbreaking bill that has offered a glimpse of hope for animal advocates in California, has just been introduced by Senator Scott Wiener (D-San...
Read more
Load more