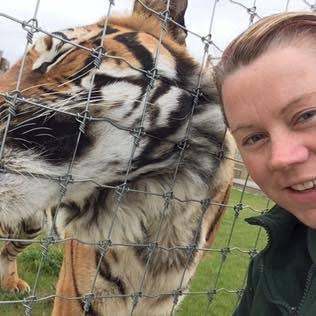 Zookeeper Rosa King Mauled To Death By Tiger At Hamerton Zoo In The U.K.

“A tiger had entered an enclosure with a keeper. Sadly the female zookeeper died at the scene,” Cambridgeshire Police said in a statement.

The zoo said in a statement that a “freak accident” was to blame for the death. “Our thoughts and sympathies are with our colleagues, friends and families at this dreadful time,” the zoo said.

Hamerton Zoo posted a statement on its website saying staff members were too “distressed” to speak to the media about the death. The zoo is expected to be closed Tuesday while an investigation continues.

Police said they were called to the zoo late Monday morning.

The tiger never escaped from the enclosure, and police said foul play was not suspected in the keeper’s death.

Visitors were evacuated when the incident began and an air ambulance was summoned to provide emergency help for the victim.

An eyewitness says visitors were removed calmly and that there was no panic.
Police did not release information about the tiger.

“This is yet another one of the hundreds of examples why wild animals do not belong in captivity”! -WAN

Previous articleEnd The Horrific Whale Slaughter In The Faroe Islands!
Next articleUpdate! India Bans The Selling Of Cows, Buffalo, and Camels For Slaughter

Breaking! New Veggie Dog Launches At Unity Diner In London On May 10th

Photo from Moving Mountains Moving Mountains, has teamed up with nonprofit vegan restaurant and bar, Unity Diner, for the world exclusive launch of its new...
Read more
News

Breaking News! Karma Strikes Again As Another Trophy Hunter Is Tampled & Killed By An Elephant In Namibia

Another trophy hunter met his fate on Saturday after he was trampled to death by an elephant in Namibia. The professional hunter, who police identified...
Read more
Load more