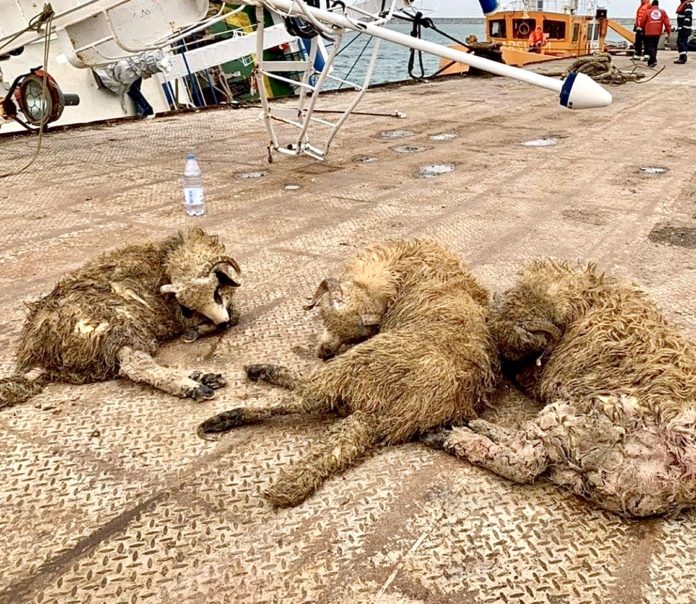 After More Than 14,000 Sheep Die In Romanian Ship Tragedy, New Report On Live Animal Transports Reveals Why Live Exports Must Be Banned Worldwide

A new report on live animal transports in Romania published by the EU Commission identifies severe shortcomings with regard to animal welfare. Animals were not examined accordingly, control reports are missing, and not enough qualified staff were provided during transport – this points to severe neglect of the EU transport regulations on Romania’s behalf.

Only recently, global animal welfare organization FOUR PAWS rescued 180 sheep in Romania after their transport vessel capsized and the majority of the sheep died – a tragedy that could have been prevented. Immediate enforcement, as well as strict controls and regulations are long overdue for live animal transports.

FOUR PAWS urges the EU Commission to start infringement proceedings against Romania and once again demands a ban of live animal transports.

The audit report found that the country’s central competent authority failed to provide instructions to support official veterinarians in checking the implementation of requirements during inspections. Furthermore, there is a general lack of records in the system of controls, including evidence of checks on whether animals that arrive are in a suitable state to continue the journey.

“The report clearly indicates Romania’s neglect of EU transport regulations. Animals must not be transported in a way likely to cause injury or unnecessary suffering. It’s obvious that the animals are not sufficiently protected,” said Dr. Martina Stephany, Director of the Farm Animals Department at FOUR PAWS in a statement. “The EU Commission must now hold Romania responsible by starting an infringement process and work towards an end to live animal transports to prevent future accidents and unnecessary suffering.”

In November 2019, a vessel with 14,000 sheep capsized on its way from Romania to Saudi Arabia, leaving the sheep to die. FOUR PAWS and its Romanian partner organization ARCA were able to rescue 254 animals, of which only 180 survived.

In early 2020, FOUR PAWS received custody of the sheep and accommodated them north of Bucharest, in a former horse farm that was adjusted to meet their needs.

“The sheep received all necessary treatments, and their on-site team makes sure that they receive all of the care that they need. The sheep are thankfully recovering well from the tragic ordeal. This is a constant reminder of the millions of farmed animals that keep suffering as long as live transports exist,” said Stephany. FOUR PAWS continues to work on a long-term solution for the sheep with the Romanian authorities.

The insufficient outcome of the report in Romania comes as no surprise to FOUR PAWS, especially considering the recent ship tragedy. It underscores that EU authorities must prevent the massive animal welfare problems that occur during live animal transports. Every year, more than three million live animals are transported from the EU to third world countries.

Live animal transport and slaughter must be banned worldwide.

Previous articleTrump Administration Moves Forward With Massive Oil & Gas Project In Alaska Threatening The Survival Of Many Endangered Species
Next articleJoin The ‘NO MEAT MAY’ Challenge Today For Your Health, The Animals & Our Planet

Breaking! Trump’s Infrastructure Plan Which Threatens Wildlife & The Environment To Be Announced Tonight During The State Of The Union Address

The Center for Biological Diversity has issued important information to help people understand what some of the recommendations mean in President Donald Trump's infrastructure proposal...
Read more
News

WAN’s Most Wanted! Urgent Help Needed To Find Sick “Subhuman” Who Burned 2 Pit Bulls With A Blowtorch In New Jersey; Donations For Medical...

Two dogs were deliberately set on fire in New Jersey in an unfathomable case of animal cruelty. Horrifically, it is suspected that the callous perpetrator,...
Read more
Load more