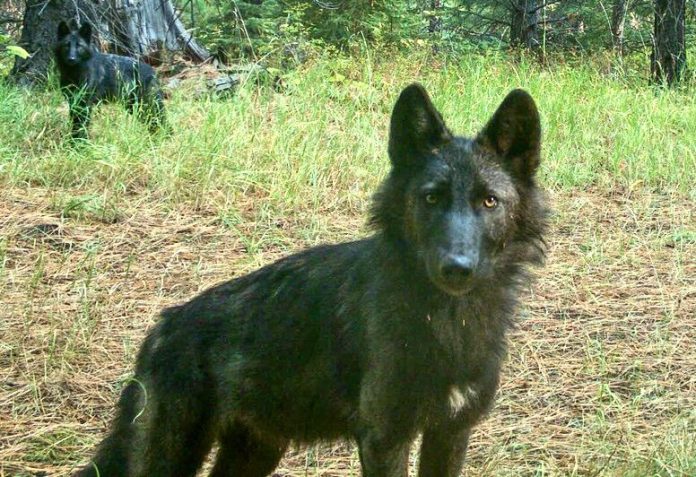 Good news for wolves as the Oregon Department of Fish and Wildlife reported that a new wolf family was photographed by biologists from the Confederated Tribe of the Warm Springs using a trail camera. The wolf family consists of two adults and two pups.

The Tribe’s reservation includes portions of Jefferson and Wasco counties. The department has designated this as “an area of new wolf activity” and reports that if there are still four wolves in this family at the end of 2022, they will be named the Warm Springs pack.

“I am so grateful this new family is making its home in a part of Oregon where wolves are still protected under federal law,” Amaroq Weiss, senior wolf advocate at the Center for Biological Diversity, said in a statement. “Illegal wolf killing is rampant in Oregon, so these animals need every possible safeguard. I hope this will be an exciting new chapter in the story of wolf recovery in the state, which is seeing wolves dispersing into territory where they have not lived for decades.”

As previously reported by WAN, Oregon’s wildlife agency estimated the wolf population at the end of 2021 to be 175 individuals in 21 packs, with a total of 16 breeding pairs. This was an increase of only two wolves from the year before. Eight wolves were illegally killed by poisoning in northeastern Oregon last year, where federal protections are absent. Those crimes remain unsolved, despite reward offers approaching $50,000 from conservation groups. Another wolf was found illegally killed in northeast Oregon in August, and a reward of $11,500 has been offered by conservation groups.

The White River pack also made this area southeast of Mt. Hood its home for several years but did not have enough members by the end of 2021 to be counted as a pack by the department. Under the Oregon Wolf Conservation and Management Plan, a pack is generally defined as “a group of four or more wolves traveling together in winter.”

Most of Oregon’s wolf packs reside in eastern Oregon, and only three packs besides the newly discovered family live in the western half of the state. On July 4th, the department confirmed the existence of a new pack with at least five pups in the Upper Deschutes wildlife management unit in Klamath and Deschutes counties.

Additional packs in the western part of the state include the Rogue pack, which inhabits Jackson and Klamath counties, and the Indigo pack, which ranges across parts of Douglas and Lane counties. Highways 97, 20, and 395 are used as the boundaries to determine whether packs are living in the eastern or western portions of the state.

Wolves in Oregon once trekked statewide but were killed off to appease agricultural interests by the late 1940s. In 1999, wolves from Idaho began to make their way into Oregon, and the state’s first pack was confirmed in 2008.

Breaking News! Pope Francis Offered One Million Dollars To The Charity Of His Choice To Try Vegan For Lent

A major global campaign announced today and backed by a high-profile coalition of celebrities, environmentalists, and organizations is calling on Pope Francis to try...
Read more
Featured Animal Spotlight

Photos By: Ishaqbini Hirola Conservancy It is with great sadness that WAN reports the tragic and senseless killing of two extremely rare white giraffes, a...
Read more
News

March began on the right foot in Guatemala after the Guatemalan Congress passed widespread animal welfare legislation; making it one of the most comprehensive...
Read more
Load more