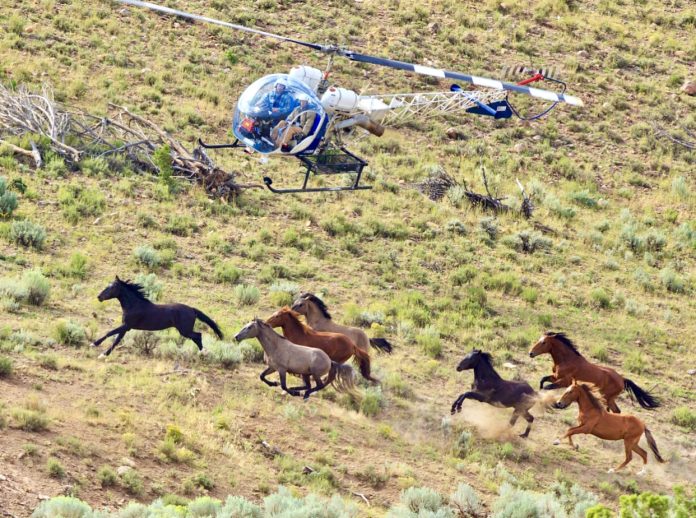 The Bureau of Land Management’s (BLM) Wheatland Off-Range Corral (WORC) in Wyoming canceled its April 1st horse adoption event due to an outbreak of Streptococcus equi, the etiologic agent for the upper respiratory disease commonly known as “strangles.” A previous adoption event scheduled for March 4th at WORC was also canceled. WORC is currently closed and the horses are quarantined, according to the BLM, until they no longer show signs of illness.

“We are calling for a moratorium on wild horse roundups in Wyoming, pending an inquiry into disease outbreak and deaths at the BLM’s two holding facilities in the state,” said Suzanne Roy, Executive Director of the American Wild Horse Campaign (AWHC). “We are concerned about how crowded conditions and reported staffing shortages are impacting the welfare of the more than 3,000 wild horses incarcerated in BLM holding pens in the state.”

AWHC, the nation’s leading wild horse protection organization, is concerned for the safety and health of all the horses, particularly mares who are foaling at this time of year. AWHC urges the BLM to make public when the outbreak began, how many horses are infected, and how many have died.

Strangles is a highly contagious, upper respiratory disease that has up to a 40% mortality rate. The 2,700 wild horses currently at Wheatland, mostly from the record-setting Checkerboard roundup from October 2021 through January 2022, are traumatized and stressed after being separated from their families and bands and have no shelter at WORC.

The privately-owned Wheatland Off-Range Corral opened in January 2021, on 100 acres of Wyoming prairie with a build-out capacity of up to 3,500 horses. Records obtained under the Freedom of Information Act (FOIA) earlier this year show that close to 50 horses have died at WORC and the Rock Springs, WY, facility in less than four months. The horses were captured in the Great Divide Basin roundup, which took place between October and November of last year.

A BLM February 2022 report shows that Wyoming’s wild horse and burro holding facilities are nearly full after the mass Checkerboard roundup. According to renowned wildlife photographer Carol Walker, who has documented these horses for years, 2,700 of the horses taken from the Checkerboard lands were hauled to WORC, up to 900 went to Rock Springs, and 200 went to the Cañon City holding pens in Colorado.

“While the BLM’s Wyoming holding corrals are filled nearly to capacity, I’ve been told that the agency is experiencing severe staffing shortages at these facilities. Given this, I do not believe that the agency has any business rounding up and removing over 1,400 more Wyoming wild horses this summer,” said Walker.

In January, the BLM released a draft Environmental Assessment for a ten-year plan for the North Lander Complex Herd Management Area that involves, among other actions, the permanent removal of 1,400 wild horses from this 375,000-acre area in central Wyoming this year.

Another Blue Cove Day For The Dolphins In Taiji, Japan

Photo from Wildlife SOS Two suspected members of a six-person poaching gang were arrested yesterday after they were found in possession of tiger bones and...
Read more
News

Photos from INTERPOL An international operation against the illegal trade in wildlife has resulted in millions of dollars-worth of seizures including parts from endangered species...
Read more
Load more