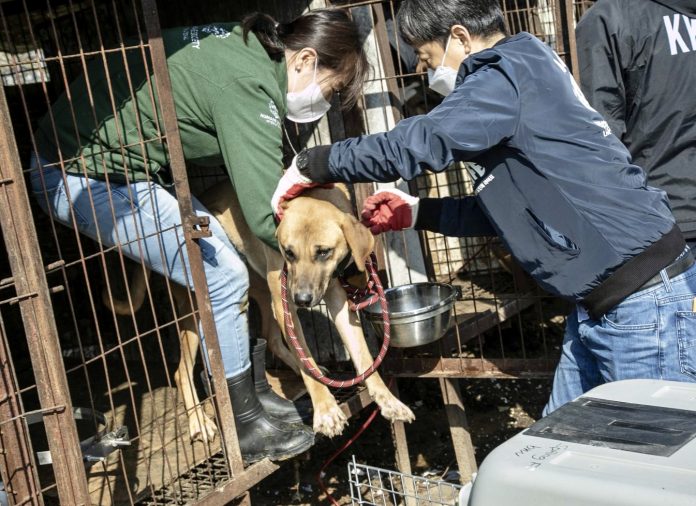 Incredible news as 171 dogs have been saved from South Korea’s brutal dog meat trade and are in need of finding loving homes in the United States and Canada. Humane Society International (HSI) rescued the dogs as part of its campaign to end the dog meat trade in South Korea.

After being rescued, the dogs were flown to the U.S. where HSI’s affiliate, the Humane Society of the United States (HSUS), will help provide assessments, veterinary care, and rehabilitation at its emergency shelter before placing them with shelter and rescue partners. Some of the dogs will be transported to HSI/Canada’s temporary shelter, where they will eventually be available for adoption.

“No matter how many dogs we rescue from this brutal trade, it never gets easier to stomach the harsh, terrifying conditions we find the survivors enduring,” said Kitty Block, CEO of Humane Society International and President and CEO of HSUS, in a statement. “On the most recent dog farm rescue that HSI worked on, the scene that greeted our team was particularly sobering because slaughter had been conducted on-site at this farm. Because of the tireless work of our staff and our partner groups in Korea, these dogs are one step closer to a new beginning as cherished family members.”

As previously reported by WAN, the dogs arriving in the United States have all escaped certain death from the meat trade. They were among more than 300 dogs saved from several dilapidated meat farms in Gimpo, Haemi, and Yongin by the teamwork of Humane Society International and its Korean animal protection group partners.

While suffering on the farms, the dogs were locked in barren metal cages without water or proper food, living in squalid conditions. In one of the locations, many of the dogs were suffering from severe malnutrition, as well as painful skin diseases, and were found huddled next to the lifeless bodies of their dead cage mates who had apparently starved to death.

On another farm, the dogs had been abandoned and risked being euthanized after the farmers running the facility had moved away following a demolition order by local officials. HSI/Korea worked with LIFE, KoreanK9Rescue, and Yongin Animal Care Association on several of these rescues, after which the farms were permanently closed down and the structures were demolished. Following their rescue, the dogs have been cared for in South Korea while transport arrangements were made.

While dog meat is eaten by some in several countries throughout Asia, South Korea is the only country that intensively farms dogs for human consumption on a large scale. An estimated 2 million dogs per year are reared on thousands of dog meat farms across the country. The conditions on these farms are horrific—most dogs live their entire lives in barren wire cages without adequate shelter or veterinary care until they are brutally slaughtered, usually by electrocution or hanging.

HSI’s pioneering program works with Korean dog farmers who want to leave the trade. HSI rescues their dogs and helps farmers to transition to more humane and profitable livelihoods. The farmers sign a 20-year contract, stipulating that they will not breed dogs or any animals, and the cages are demolished to ensure that no animals will suffer on the property in the future.

So far, HSI has saved more than 2,000 dogs from Korean dog meat farms. The dogs are brought to the United States, Canada, and the United Kingdom for adoption. HSI’ shelter partners often report increased public interest in dog adoptions overall from the publicity they receive from the Korean dog meat trade survivors, as a result, more dogs thankfully find loving homes.

The world’s leading international express delivery provider, DHL, has delivered a black rhino to its natural homeland in Tanzania after a move from its...
Read more
News

The French national assembly passed a bill for mandatory cameras in slaughterhouses today. The controversial measure, to be implemented in 2018, follows a remarkable...
Read more
News

The Whale Sanctuary Project announced yesterday that they are narrowing their search for a site to create a model seaside sanctuary for orcas and belugas...
Read more
Load more