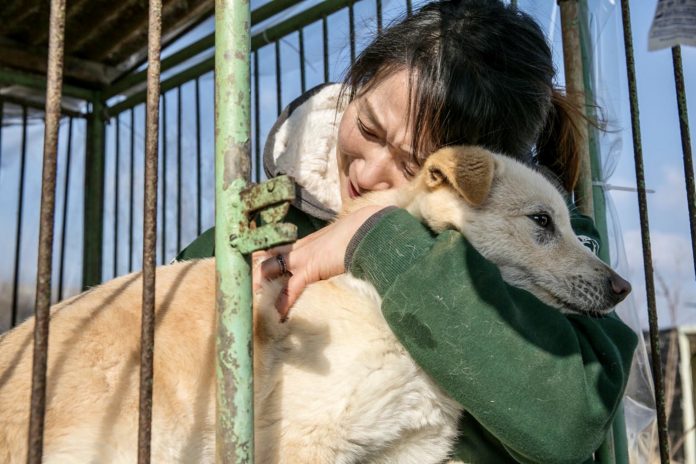 More than 70 dogs found languishing on a South Korean dog meat farm by  Humane Society International (HSI) have been given a second chance by the farmer’s decision to quit the dog meat industry once and for all. Mr. Nakseon Kim has been breeding dogs for nearly 40 years, but decided to leave dog farming behind when HSI offered to help him start a new life growing cabbages and other vegetables instead.

Amid growing South Korean opposition to eating dogs and new regulations and court rulings cracking down on the industry, farmers like Kim are increasingly looking for an exit strategy.

“I don’t think there are many people in South Korea who are willing to run dog meat farms anymore. There is no future in this dog meat industry. Once HSI helps me close my dog farm, I think I will start to grow crops instead like lettuce, cabbage, or other greens to sell to restaurants,” Kim said in a statement. “That is a business with a future.”

Tragically, up to two million dogs a year are bred and raised on thousands of dog meat farms across South Korea.

In rows of dilapidated cages, surrounded by animal waste, junk, and garbage, some dogs are destined for the slaughterhouse, and others the unscrupulous puppy mill trade. Despite Korea’s dog meat industry attempting to claim a difference between pet dogs and “meat dogs,” they are all just dogs whose fate ultimately depends on where greatest profits can be made.

“Unfortunately, it is still very common in South Korea to witness live puppies for sale in pet shop windows. But, what most Koreans will be shocked to learn is that these same puppies could easily have ended up being killed for human consumption instead. Whether they live or die, they are all born in this miserable place, their mothers intensively bred over and over until they are exhausted and eventually sold to slaughterhouses,” stated Nara Kim, HSI/Korea’s dog meat campaigner. “I am so glad that this nightmare has ended for these lovely dogs, but until the government commits to phase out this dreadful industry, the nightmare continues for millions more. As Koreans, we need to be their voice and call for an end to the dog farming and dog meat industries.”

Marking the 16th dog farm that HSI has closed since its farmer transition program began in 2015, all the dogs will eventually be flown to partner shelters in Canada and the United States to seek adoptive homes.

First, they are being relocated to a temporary boarding facility in South Korea while the organization waits for COVID-19 travel restrictions to relax. Once safely off the farm, the dogs will immediately receive a full veterinary check-up and settle into their temporary quarters where they can begin their rehabilitation.

Dog meat consumption has been steadily declining in South Korea, and is banned or severely restricted in Hong Kong, Taiwan, Thailand, Singapore, and the Philippines.

In 2018 both Indonesia and Vietnam’s capital city Hanoi pledged an end to the dog meat trade, and most recently in April 2020, the Chinese cities of Shenzhen and Zhuhai banned dog and cat meat consumption following a public statement by the Chinese government that dogs are considered companions and not livestock.

As global pressure builds for countries across Asia to permanently close wildlife wet markets amid coronavirus risks, the array of undeniable human health risks by the dog meat trade in South Korea and across Asia is strengthening calls for action to end the trade across the continent.

Breaking! New Bill Introduced In California Would Require Companies To Have A No Deforestation Policy; Palm Oil, Cattle, Rubber, Etc.

Photo by: Katie Cleary Given the ever-present and increasing threat climate change poses to our world, and the role tropical deforestation plays in escalating that...
Read more
News

One of the toughest bans on ivory sales in the world is a step closer to coming into force in the UK after yesterday's introduction...
Read more
News

Breaking! WAN Exclusive With Robert Lagonera Who Helped Save Baby Deer After Heroic Police Officer Performed Emergency C-Section After Mother Was Hit By A...