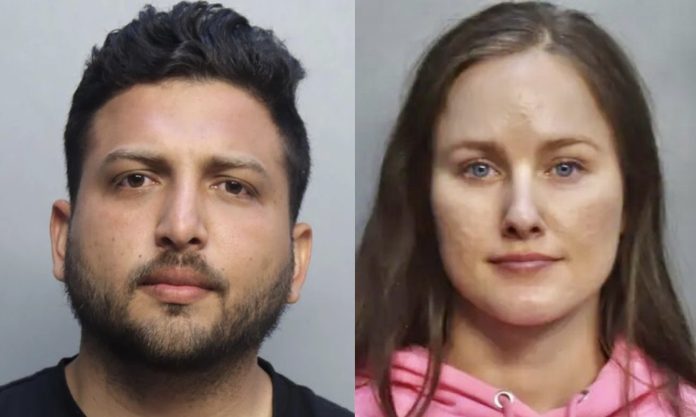 On May 11th, police arrested 29-year-old David Torres-Bocanegra after a video went viral of he and crewmembers aboard a yacht popping balloons and dumping them into Biscayne Bay in Florida. He now faces charges of reckless disregard for the environment.

On Friday, May 13th, 26-year-old Martina Gaspoz was also arrested and is being charged with willful disregard for the environment, which is a felony.

According to Miami-Dade Police, in addition to the arrest, 10 civil citations were issued to the other individuals involved, totaling over $25,000.

The disturbing footage, that was captured in the Bayshore Landing Marina, was shared on social media by MMG Outboard Division on Tuesday, May 10th. MMG said they also shared their concern with the yacht crew but were ultimately ignored.

“At MMG we pride ourselves on protecting and spreading awareness on the beautiful waters we get to call home. The same waters our friends, colleagues, and clients get to enjoy on the beautiful vessels we sell,” said MMG in their Instagram post.

“We do not pride ourselves on exposing the mistakes of others, however, we decided the events we witnessed deserve to be seen with your own eyes to truly understand the level of neglect and complete lack of care of which numerous boaters, captains, and passengers alike are treating our oceans with,” continued MMG.

According to the RSPCA, many marine species have been found with balloons in their stomachs as they are commonly mistaken for jellyfish, a staple food for many species. Reports from the U.S. and Canada have confirmed that balloons are regularly ingested by sea turtles.

A researcher from the University of Texas found that out of all the stranded sea turtles that were studied, 5% were found to have pieces of balloon and plastic bags in their digestive system.

Due to how harmful balloons are for wildlife and the environment, it is crucial that we make the effort to try to choose other alternatives. If balloons are used, please be sure to dispose of them properly.

Together, we can help to protect our oceans and the marine life that call our earth’s beautiful underwater ecosystems home.

Previous articleCritically Endangered Mother & Daughter Orangutan Rescued & Released Back Into The Wild In Borneo
Next articleUpdate! India The Pet Tiger That Was Found In A Houston Neighborhood Last Year Is Now Thriving At Cleveland Amory Black Beauty Ranch

Tampa, FLORIDA-Pinky the flamingo was one of Busch Garden's animal ambassadors. Tragically, she died on Tuesday after being attacked by a park visitor. His...
Read more
News

Great news for the survival of America's mountain lions as new cubs were discovered by researchers in Southern California this past week. Three females and...
Read more
News

Mexico Permanently Bans Gillnets In Latest Effort To Save Vaquita

With only about 60 individuals left in the population, the vaquita (Phocoena sinus) is the world's smallest and most critically endangered cetacean. This week,...
Read more
Load more