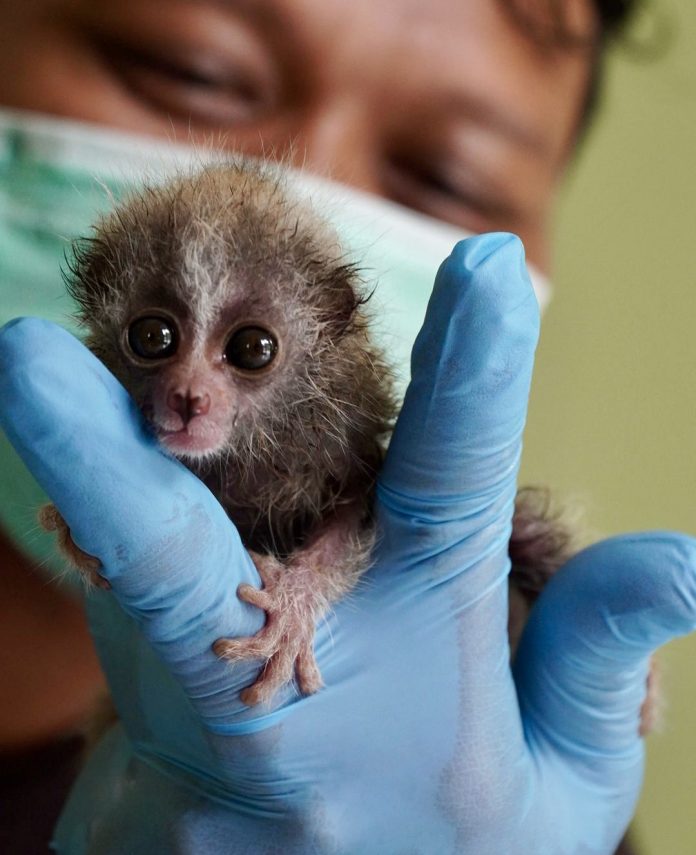 A baby slow loris that was rescued from a residential garden in West Java, Indonesia, at the end of December is making remarkable progress, according to the veterinary team caring for her. Continuing their life-saving work, a rescue team from the Balai Besar Natural Resources Conservation Agency (BBKSDA) and International Animal Rescue (IAR Indonesia) came to the aid of the tiny Javan slow loris.

Now named Meli, after it was reported by a resident named Meliyana, the fragile animal was found in a weak condition, lying in the middle of the garden. Thankfully, she is on the mend. 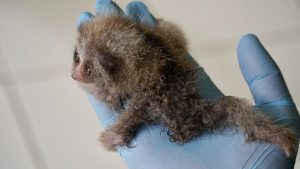 “Knowing that the slow loris is a protected species, Meliyana reported the discovery to the authorities,” Slamet Priambada, Head of the Cirebon BKSDA, explained in an email sent to WAN.

The little female slow loris was believed to be less than one month old. She was taken by the rescue team to IAR’S primate rehabilitation centre in Bogor, West Java, where she was given a thorough medical examination by IAR’s veterinary team and received treatment. 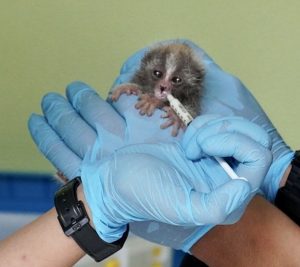 “The loris was treated by IAR Indonesia because she is still a baby and not yet able to feed or fend for herself,” noted Priambada. “Later, when she is older and has grown healthy and strong, she will be released in an area which has suitable habitat for slow lorises.”

After an initial examination, IAR  veterinarian Indri Saptorini explained that Meli was weak and in poor condition. This was because she had been deprived of her mother’s care. In addition, she was found to have cuts which suggested that she might have fallen from her mother’s grasp.

“Baby lorises generally depend on their mothers until the age of six months. So Meli is receiving intensive care and her condition is being assessed every two hours,” stated Saptorini. “The medical team has also put her in a suitably warm place in the hope that her condition will continue to improve.” 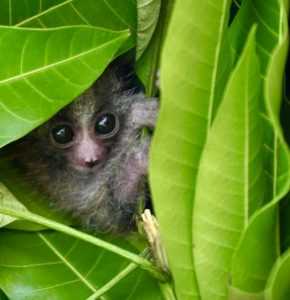 The latest update on Meli is that she is growing into a healthy and active slow loris. Saptorini reports that she has a good appetite and has reached an ideal body weight. The medical team is monitoring her growth closely. She is in a special enclosure with a heating pad  and a slow loris soft toy for comfort.

Meli is being given special nutrition to support her growth and health and every morning she is taken out to a nearby tree to learn how to climb and benefit from the warmth of the sun. 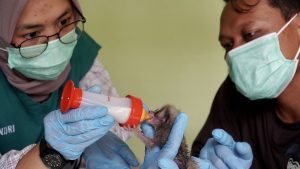 Meli’s treatment and care will be lengthy. When she is bigger and stronger, she will be moved to a bigger enclosure and provided with enrichment to stimulate her natural behavior and prepare her for release back into her natural habitat. During the entire period of rehabilitation, she will be monitored daily by the vets and keepers at the centre to make sure she is healthy and learning how to survive back in the wild.

“The Javan slow loris is listed as Critically Endangered on the IUCN Red List. The species is threatened by habitat loss and the illegal trade in slow lorises as pets, which costs the lives of countless lorises each year,” said Alan Knight, IAR’s CEO. “Thankfully our work raising awareness of the cruelty of this trade is producing results, leading us to hope that one day lorises like Meli may live free from the threat of poachers and illegal wildlife traffickers.

Previous articleCalifornia Bill To Require Pet Microchipping Aims To Reduce Number Of Animals Euthanized In Shelters Throughout The State
Next articleMeet Some Loving Adoptable Dogs Who Are Looking For Their Furever Homes; Here Are WAN’s Rescues Of The Week!

Many recent tragedies with regards to human interference with wildlife has been documented this past year. One of the most prominent was the story...
Read more
News

Less than one month after being appointed the new Minister of Environmental Affairs in South Africa, Mrs. Nomvula Paula Mokonyane, has announced her crucial...
Read more
Breaking News

Breaking! 500 Groups Call For The Next President Of The United States To Declare A National Climate Emergency

Today, more than 500 conservation, environmental justice, youth, health, faith, and labor groups called on the next President of the United States to declare a National...
Read more
Load more