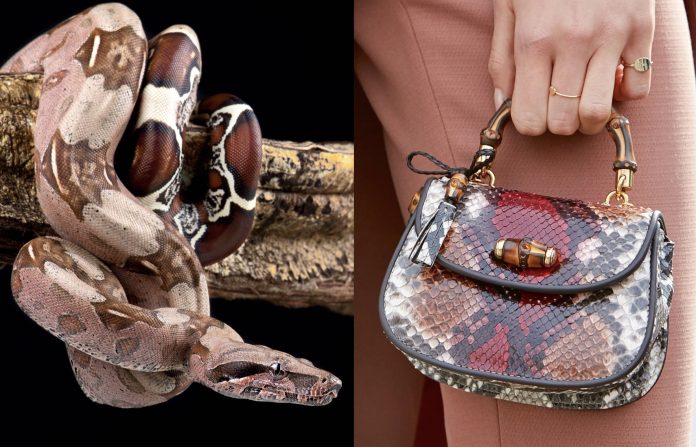 The Kering group, which manages many luxury brands including Gucci and Saint Laurent, has already eliminated fur from its fashion houses and just took another big step toward cruelty-free fashion. The group is investing in a startup that’s developing cell-cultivated leather, which would go even further to protect animals and potentially reduce the use of leather made from plastic. Unfortunately, the company is still using skins of snakes and other reptiles to make belts, wallets, handbags, and accessories.

The majority of snakes killed for their skins are cobras, pythons, boa constrictors, and various water and rat snakes. These exotic snakes are either hunted or stolen from the wild and transported to slaughterhouses or skin traders.

“For many years, Kering has sought to take the lead in sustainability, guided by a vision of luxury that is inseparable from the very highest environmental and social values and standards. When it comes to animal welfare, our Group has always demonstrated its willingness to improve practices within its own supply chain and the luxury sector in general,” said François-Henri Pinault, Chairman and CEO of Kering.

Snakes’ heads are nailed to trees or they are decapitated with machetes before their skin is ripped from their bodies. To expand their skins before the gruesome skinning process begins, a tube is shoved into the snakes’ mouths to force-feed them water. The metabolism of snakes is very slow and causes them to feel pain for extended periods of time, even after they’ve been decapitated.

Monitor lizards and other lizard species suffer the same fate as snakes for the fashion industry. They are roughly handled and may have their limbs bound or broken before they are clubbed unconscious or incapacitated through severing their spines or other violent acts in blood-soaked skinning facilities. They are then decapitated and their skin is ripped from their bodies.

Alligators and crocodiles are bred in filthy facilities for their skins and denied everything wild animals need to thrive. Their spines may be severed using metal rods to keep them from moving during the brutal skinning process and they may be cut open and skinned while fully conscious.

What You Can Do:

No matter the supplier, the production of accessories and apparel with exotic skins involves violence and death. Luxury fashion houses Gucci, Saint Laurent, Bottega Veneta, Balenciaga, Alexander McQueen, and Brioni are managed by the Kering group which recently committed to going fur-free. Now, we must urge the Kering group to eliminate exotic skins!

Photos By: Inverdoorn Private Game Reserve This week, the South African Department of Forestry, Fisheries and the Environment (DFFE) confirmed that 24 rhino carcasses were discovered after...
Read more
News

Urgent! Sign Petition Demanding Petar Pishtalov Of Bulgaria Receive Maximum Sentence After 70 Of His Abandoned Horses Die In The Snow

Photo from Twitter as per novinite.com Unfathomably, 70 horses were recently discovered, dead or dying, after they had been abandoned high on a snow-covered Osogovska...
Read more
Load more