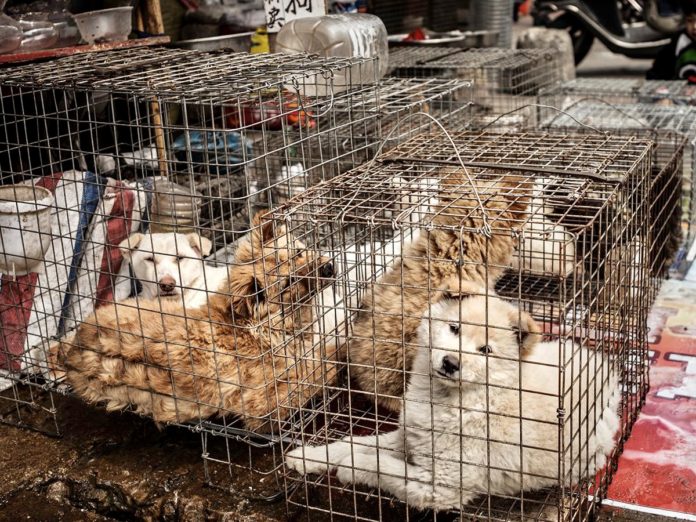 The dog meat trade tragically exists throughout China, but the annual Lychee and Dog Meat Festival in Yulin epitomizes the suffering and brutality of this cruel industry. However, a recent change in the way dogs are classified in the country gives us a perfect opportunity to shut this festival of horror down for good.

Although some claim consuming dog meat is a “tradition,” the Yulin dog meat festival was only recently created. This year, the days-long event is scheduled to take place June 21st through June 30th, and thousands of dogs are expected to be mercilessly butchered and consumed at the event.

“The Chinese government took a big step to acknowledge changing public attitudes by declassifying dogs as livestock. Tens of thousands of caring In Defense of Animals supporters in China, the U.S., and around the world have signed IDA’s alerts to end Yulin’s annual dog meat festival,” Fleur Dawes, Communications Director for In Defense of Animals (IDA) told WAN. “We urge the government to follow in the footsteps of the cities of Shenzhen and Zhuhai by placing an outright ban on the consumption of dog and cat meat to end the Yulin Lychee and Dog Meat Festival once and for all.”

Many of the dogs have led lives of cruelty and deprivation, while others who end up at these festivals are companions who were stolen. Sadly, they all end up being heartlessly tortured, slaughtered, and eaten.

This festival poses serious risks to human health. The World Health Organization has linked the consumption of dog meat to outbreaks of numerous diseases in people, including cholera and trichinellosis, along with rabies, which is a problem Yulin struggles with. There’s also the risk of contracting E.Coli and salmonella, or consuming meat from dogs who were killed with poison.

This event is exceptionally dangerous this year given the risk of perpetuating the spread of COVID-19.

However, there is more hope now than ever that the dog meat trade can be stopped since China has just taken a momentous step forward.

As WAN recently reported, China’s Ministry of Agriculture and Rural Affairs has just announced that dogs are companions. They are no longer classified as “livestock” who can be commercially bred, raised and traded.

Yulin must not be allowed to defy this change by continuing to torture and slaughter dogs.

What YOU Can Do

In Defense of Animals and their Korean rescue partner Jindo Love Rescue are working to end the Asian dog meat trade and rescue innocent victims.

Please sign IDA’s letter to officials in the Guangxi Zhuang Autonomous Region asking them to ban the consumption of dog meat for good in Yulin and to shut this festival down forever. SIGN HERE!

The chimpanzee in the photo is not the one that was killed over the weekend. WAN is heartbroken to report that a 27-year-old male chimpanzee...
Read more
News

Three juvenile male black bears were thankfully released back into their natural habitat on June 13th by biologists from the Arizona Game and Fish...
Read more

Breaking! Animal Defenders International Warns Number Of Animals Suffering In Labs Reported By The USDA Is Off By Millions

Animal testing must stop! Yesterday, Animal Defenders International warned that the latest government figures on the number of animals used in experiments are incorrect; noting that 792,168...
Read more
News

Daily Mail  A victorious day for the 66 abandoned research chimps left to perish on islands in Liberia. After two years of constant pressure from animal...
Read more
News

Photos from CHP While working on an update on the devastating wildfire in Northern California that is currently threatening people and animals in Redding and...
Read more
Load more