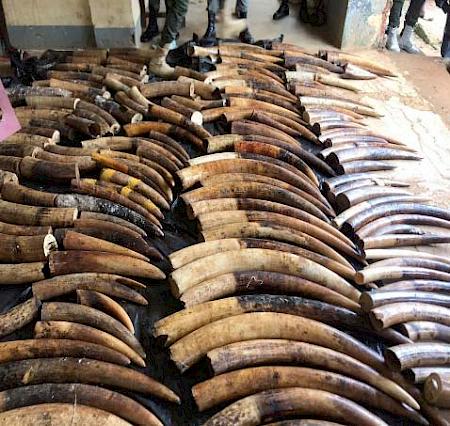 The seized tusks in Cameroon. Photo by Maha Ngalie, MINFOF, Ministry of Forestry and Fauna, Cameroon

Customs officials in Cameroon seized 118 ivory tusks weighing approximately 626 kg last week. The tusks were hidden in a truck of merchandise in Ambam, in the southern region of Cameroon in Central Africa. As per TRAFFIC, this marks the largest seizure made in the area, where the three countries of Cameroon, Gabon, and Equatorial Guinea meet.

According to Cameroonian officials involved in the investigation, one suspect was caught at the scene and is reported to be a Cameroonian arriving from Gabon. The suspect reportedly has connections to an international wildlife trafficking network.

The size of the seizure is above the 500 kg threshold considered under the Convention on International Trade in Endangered Species (CITES) to be indicative of organized criminal activity. Arrest warrants are expected to follow the investigation.

“TRAFFIC congratulates Cameroonian Customs for this important seizure, and in line with CITES guidelines, we urge the authorities to carry out a thorough forensic examination of the shipment, and also liaise with enforcement colleagues in any other countries implicated in the trafficking to try and bring the perpetrators to justice,” Denis Mahonghol, Director of TRAFFIC Central Africa, said in a statement.

In 2016, TRAFFIC launched AFRICA-TWIX, The Trade in Wildlife Information eXchange, an online tool developed to facilitate the exchange of information and co-operation between enforcement officers in Central African countries. The system includes both a secure mailing list and a database of wildlife seizures and criminal prosecutions, and has around 200 active users from Forestry and Justice Departments, Customs, Police, ICPO-INTERPOL, United Nations Office on Drugs and Crime (UNODC), and the World Customs Organization (WCO).

By means of using the AFRICA-TWIX platform, Cameroon TWIX users are now able to communicate quickly with counterparts in neighboring countries, allowing for fast and deeper cross-border investigations into one of the biggest cases of organized wildlife crime involving Cameroon and its neighbors.

A number of investigations have been triggered based on information shared on AFRICA-TWIX, including in 2016, a case where 44 ivory tusks from Gabon were seized by rangers from a vessel flying a flag of convenience in the territorial waters of Cameroon and heading to Nigeria. A subsequent investigation revealed that the tusks had originated from an earlier robbery of a ivory stockpile.

Previous articleBreaking! Estonia & Poland Are One Step Closer To Becoming The Latest European Countries To Ban Fur Farming
Next articleBreaking! A Lawsuit Filed Today Aims To Save An Estimated 300 Leopards Each Year From Being Imported Into The United States By Hunters As So-Called “Trophies”

Cretonia Times Animal welfare officers and organizations must be used to people becoming disgruntled on the other end of a warrant to remove animals from...
Read more
News

The Seabin Project was designed as an automated rubbish bin that catches floating rubbish, oil, fuel and detergents. The Seabin helps to clean our oceans...
Read more
News

Yesterday, Dr. Jane Goodall joined with many of the world’s leading animal protection and conservation organizations to urge the 88 member countries of the International...
Read more
Load more