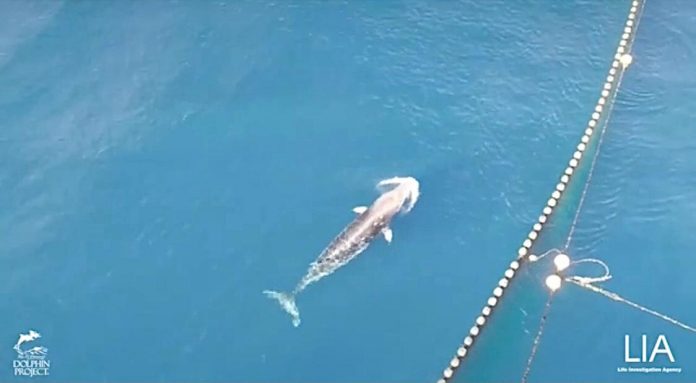 It is with heavy hearts that WAN shares the tragic news that an adolescent minke whale, who was trapped for 19 days in fishing nets in Taiji, Japan, was brutally slaughtered by fishermen aboard boats owned by the Taiji Fisheries Association.

Ren Yabuki, Campaign Director of Life Investigation Agency (LIA), who, in collaboration with Dolphin Project, had been documenting the plight of the confined minke whale that they named Hope. He shared the news in a statement which included the horrific details of the whale’s struggle at the hands of Taiji fishermen.

“While shooting with a drone, I witnessed the agony of the minke whale, and my hands were trembling with sadness,” noted a distraught Yabuki. “I lost my voice and felt as though my blood was boiling.”

Appalling, according to Yabuki, the fishermen were laughing as they violently brutalized and drowned the minke whale before sending it off to be butchered for its meat.

Minke whales are estimated to live for approximately 50 years in the wild.

As noted by the Humane Society International (HSI), the Government of Japan recently issued its quotas for the country’s commercial whaling operations for 2021, setting the catch limit of large whales at 383. The quota allows a catch limit of 171 minke whales including a potential ‘by-catch’ of 37. They also allow for the capture of 187 Bryde’s whales and 25 Sei whales.

“HSI believes that deliberately entrapping whales for prolonged periods under the guise of ‘by-catch’ is inhumane and we call on the people of Japan to speak out against this cruelty,” HSI’s Animal Welfare Program Manager, Georgie Dolphin, said in a statement. “The commercial killing of whales is subject to a global ban, but Japan has sought to escape the ban by leaving the International Whaling Commission. Consequently, they continue to kill whales for commercial purposes completely outside of the framework of international law. We will continue to call on the Japanese government to bring an end to all forms of commercial whaling and dolphin hunting due to the immense animal cruelty caused.”

On February 9, 2014, a healthy two-year-old giraffe named Marius was culled and subsequently, dissected in front of the public at Copenhagen Zoo. The zoo...
Read more
Breaking News

A Historic Win As Spain Announces Plans To Ban The Hunting Of Wolves To Protect The Last 1,500-2,000 Remaining In Spain

Animal welfare groups worldwide are elated after Spain announced plans to ban the hunting of wolves. All wolves in Spain are now listed as...
Read more
Breaking News

The South African Revenue Service (SARS) Customs Unit seized a shipment of rhino horn that was destined for Malaysia. The estimated value of the recovered horn...
Read more

Previous articleHeartbreaking News! Six Park Rangers Have Been Attacked & Killed By Armed Assailants In Virunga National Park
Next articleWAN Exclusive Update On Florida Manatee With The Word ‘TRUMP’ Etched On Its Back; $5,000 Reward Offered For Information

Breaking! The Vietnamese Embassy In Chile Explains Why They Had Shark Fins Drying On Roof Of Trade Office Building; This Should Be Illegal!

El Mostrador Newspaper  A questionable report that shark fins were drying on the roof of the Vietnamese embassy in Chile was confirmed today as factual. According...
Read more
Breaking News

Primarily Primates, a non-profit sanctuary in Bexar County, Texas, that provides lifetime care for hundreds of animals including 32 chimpanzees, is among millions without power...
Read more
News