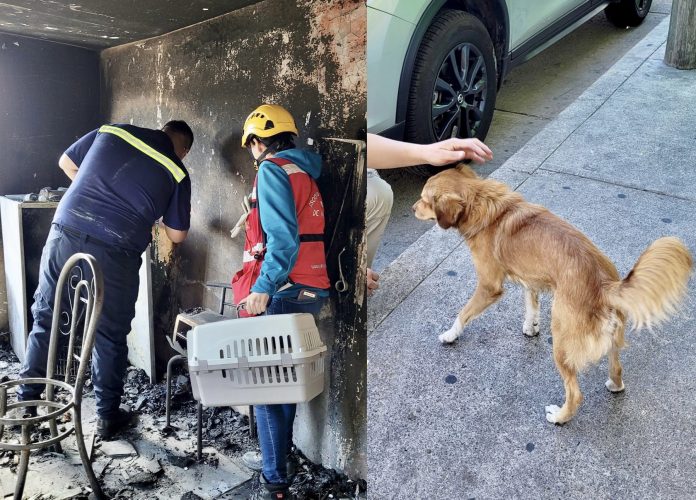 On Wednesday, October 26th, Humane Society International/Mexico provided relief to animals after a fuel tanker crashed and sparked a huge blaze in Aguascalientes, Mexico. The accident started a massive fire engulfing dozens of homes and resulting in the evacuation of 1,500 people.

Sadly, 22 animals were killed and more than 100 others, including 55 dogs, nine cats, 31 birds, and one rabbit, were impacted by the explosion. Thankfully, no human lives were lost. An estimated 20 animals are currently being held in temporary shelters, while the rest have been reunited with their families.

HSI/Mexico’s team was on the ground coordinating with local authorities to facilitate access to rescue pets whose owners had been evacuated to emergency shelters, and to reunite them with their families. In addition, HSI/Mexico provided pet food, cages, dishes, and other essentials so that animals were properly cared for. The organization also coordinated the help of the local veterinary association, animal protection groups, and government officials.

“It is heartbreaking to witness people and animals suffering in a disaster such as this. These animals play a crucial role in the lives of the people affected by the explosion, who consider them members of their family,” Felipe Márquez, HSI/Mexico’s animal cruelty program manager, said in a statement. “Safely reuniting people and pets at a time like this brings all concerned immense emotional comfort, so we are grateful to the Aguascalientes authorities for including animal protection in their disaster response and for coordinating with animal protection groups such as HSI/Mexico. The help we are able to provide is making the difference in a very dire situation for the people and animals affected by this terrible accident.”

HSI responds to disasters around the world to assist animals and communities in need. For example, in 2018, HSI stepped in to provide emergency treatment to dogs, cats, chickens, horses, and other animals affected by the Volcan de Fuego eruptions in Guatemala. In 2017, the organization also helped more than 6,200 animals affected by deadly earthquakes in Mexico. Most recently, members of HSI/Mexico were deployed to Poland and Romania to assist HSI’s local team in helping refugees with pets who had escaped the war in Ukraine.

Previous articleFour Lion Cubs & A Black Leopard Have Been Rescued From War-Torn Ukraine & Are Now Safe In Poland
Next articlePlant-Based Beyond Steak Debuts In Stores Nationwide, Including More Than 5,000 Krogers & Walmarts

The McCartney Family, Joaquin Phoenix & Ela Gandhi Are Among Those Urging UN’s COP26 To Adopt The Plant Based Treaty To Avert A Climate...

Milenio News The incredible search and rescue dog named "Titan" who is a member of the fire company of Silao has rescued at least 21...
Read more
Load more