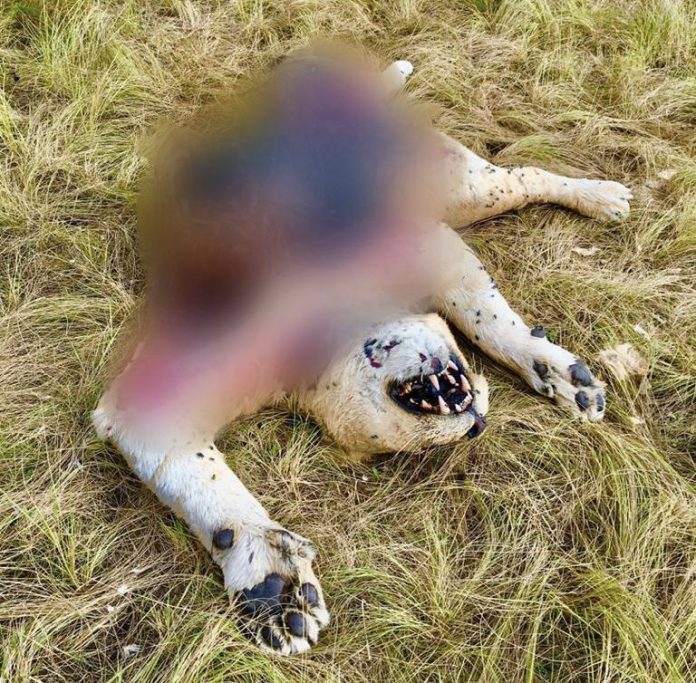 The following is an update to the article WAN posted this morning about the six lions that were found dead of suspected poisoning in the Ishasha sector of Queen Elizabeth National Park in Uganda on Friday.

As per UWA, the suspects took the security team to a location where three heads of lions were found hidden in a tree and the fourth one was buried. Horrifically, 15 legs were also found under the same tree. The suspects said they dropped one leg in the park.

Three bottles containing a chemical commonly known as Furadan and a two-litre jerry can of lion fat oil were recovered in a banana plantation. Two spears, one panga, and one hunting net were found hidden in a garden at the home of Tumuhire Vincent.

On Monday evening, UWA received credible information about the people suspected to be behind the killing of the lions, a joint operation by UPDF, Police, and UWA was conducted leading to the arrest of the four suspects. The suspects will be arraigned in the courts of law in Uganda.

Uganda Wildlife Authority announced the heartbreaking news over the weekend that six lions were found dead and dismembered on Friday evening in the Ishasha sector of Queen Elizabeth National Park. The area is known for its tree climbing lions.

According to a statement by the UWA, dead vultures were also found near the deceased lions’ carcasses, which suggests that the animals were most-likely poisoned by unknown people.

Sadly, this is not the first time that lions have been killed in Queen Elizabeth National Park. In April 2018, 11 lions were found dead after a suspected poisoning. A similar situation also happened in May 2010 resulting in the death of five lions.

A team of investigators is currently on the ground collaborating with police in Kanungu district. Given that some of the lions’ body parts are missing, authorities believe the killings to be connected to the illegal wildlife trade.

UWA strongly condemns the illegal killing of wildlife, it not only negatively impacts tourism throughout the country, but also revenue generation which supports conservation and community work in protected areas.

As previously reported by WAN, there are only an estimated 20,000 lions remaining in the African wilderness.

The Uganda Wildlife Authority stated that they will continue to strengthen the protection of lions and other species of wildlife throughout the country.

The Biden Administration announced yesterday its intent to prepare a programmatic environmental analysis of the impacts of decommissioning oil and gas drilling platforms, pipelines, and...
Read more
News

WAN Talks With Ellen Dent, Co-Founder Of Animal Alliance Network About Her Activism & The 40 Cows That Escaped A Pico Rivera Slaughterhouse

Photos from Animal Alliance Network and Farm Sanctuary Last week, all eyes were fixated on the harrowing images of 40 terrified cows running for their...
Read more
News

Born Free USA Releases New Report On Cruel & Indiscriminate Animal Trapping In The U.S.; Help Put An End To It In Your State!

When Queensland, Australia native Regina Pandurovic realized her health was declining she knew she could no longer be the best pet mother for her 19-year-old...
Read more
News

Outrage After Woman Drags Dog Behind Electric Scooter In Bakersfield, California; Justice Must Be Served!

Photo of the woman who dragged the bloodied dog behind an electric scooter. Photo by Brandon Sanders, Facebook. The use of electric scooters has raised...
Read more
Load more