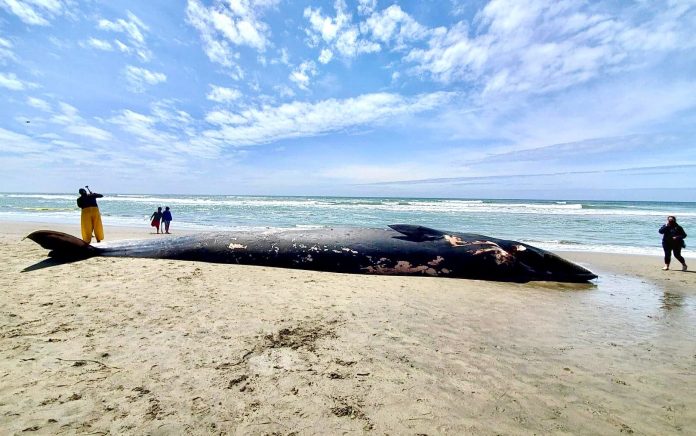 Conservation groups and concerned citizens gathered at Crissy Field Beach in San Francisco earlier this week to honor 12 dead whales that have washed up on shore in the Bay Area so far this year. It is believed that at least four died from ship strikes.

“Dead whales washing up on Bay Area beaches is a wake-up call. We answered that call at this event by demanding action to address ship strikes, entanglement in fishing gear, and climate change,” said Steve Jones with the Center for Biological Diversity, in a statement. “Whales are essential to healthy oceans because they spread nutrients and store carbon. The more we can do to protect them as their populations recover, the better off we will all be.”

Against the backdrop of the Golden Gate Bridge, through which cargo vessels and fishing boats pass regularly, speakers at the event called for a mandatory 10-knot speed limit for ships passing through whale habitats along California’s coast. Blue, fin, humpback, gray, and other whales migrate along the West Coast, where they are most directly threatened by vessel strikes and entanglement in fishing gear.

Speakers also emphasized need for strong national action to address climate change, which can cause malnutrition as the food sources for whales have decreased or moved. This can result in an increase of whales in areas where they are more likely to be entangled or hit by ships.

“The global shipping fleet has quadrupled in size since the 1980s and emits more climate pollution than all coal plants in the United States combined,” noted Madeline Rose, climate campaign director for Pacific Environment. “California is the nation’s largest maritime importer and is home to the nation’s largest seaport complex. We are calling on Speaker Pelosi and all California leaders to make zero-emission shipping an urgent priority.”

Messages demanding change were also sent to key members of Congress, as well as to California Governor Gavin Newsom and state wildlife officials urging for more support in certifying ropeless fishing gear and encouraging its use.

“We have witnessed a comeback of whales off of California’s shores, with gray, blue, and humpback whales recovering at least some of their depressed populations from whaling in the 19th and 20th centuries,” stated Mark J. Palmer, Associate Director of the International Marine Mammal Project of Earth Island Institute. “But, these fragile whale populations are facing new hazards along our shores. These problems can be fixed, but we need to take action now.”

Breaking! Three Poachers Are Sentenced To A Combined 105 Years In Prison For Killing Three Rhinos In South Africa

Previous articleVictory! Israel Becomes The First Country In The World To Ban The Sale Of Fur
Next articleThe Fight To Restore Federal Protection For Gray Wolves Intensifies After Devastating Laws Allowing Their Slaughter Are Passed In Idaho & Montana

VICTORY! TWO MORE DOLPHINS IN SOUTH KOREA ARE BEING FREED!

After 20 years of captivity, two dolphins being held at Seoul Grand Park in Seoul, South Korea will soon be released into their original...
Read more
News

furfreealliance.com The Center for Biological Diversity sued the U.S. Fish and Wildlife Service last week over its program allowing the export of tens of thousands...
Read more
Industry News

New York may be on its way to becoming the latest state to implement common sense legislation that would prohibit the sale of dogs, cats,...
Read more
Load more