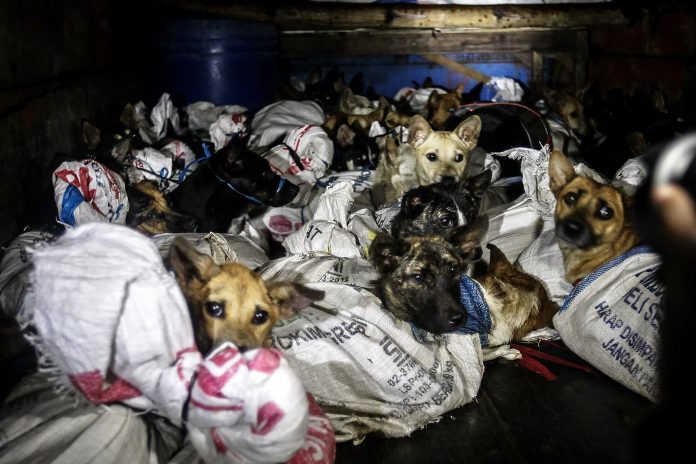 An alleged dog meat trader on the Indonesian island of Java has been arrested and a delivery truck packed with 53 dogs has been intercepted. This is the country’s first-ever large-scale police raid on an illegal dog meat slaughterhouse. 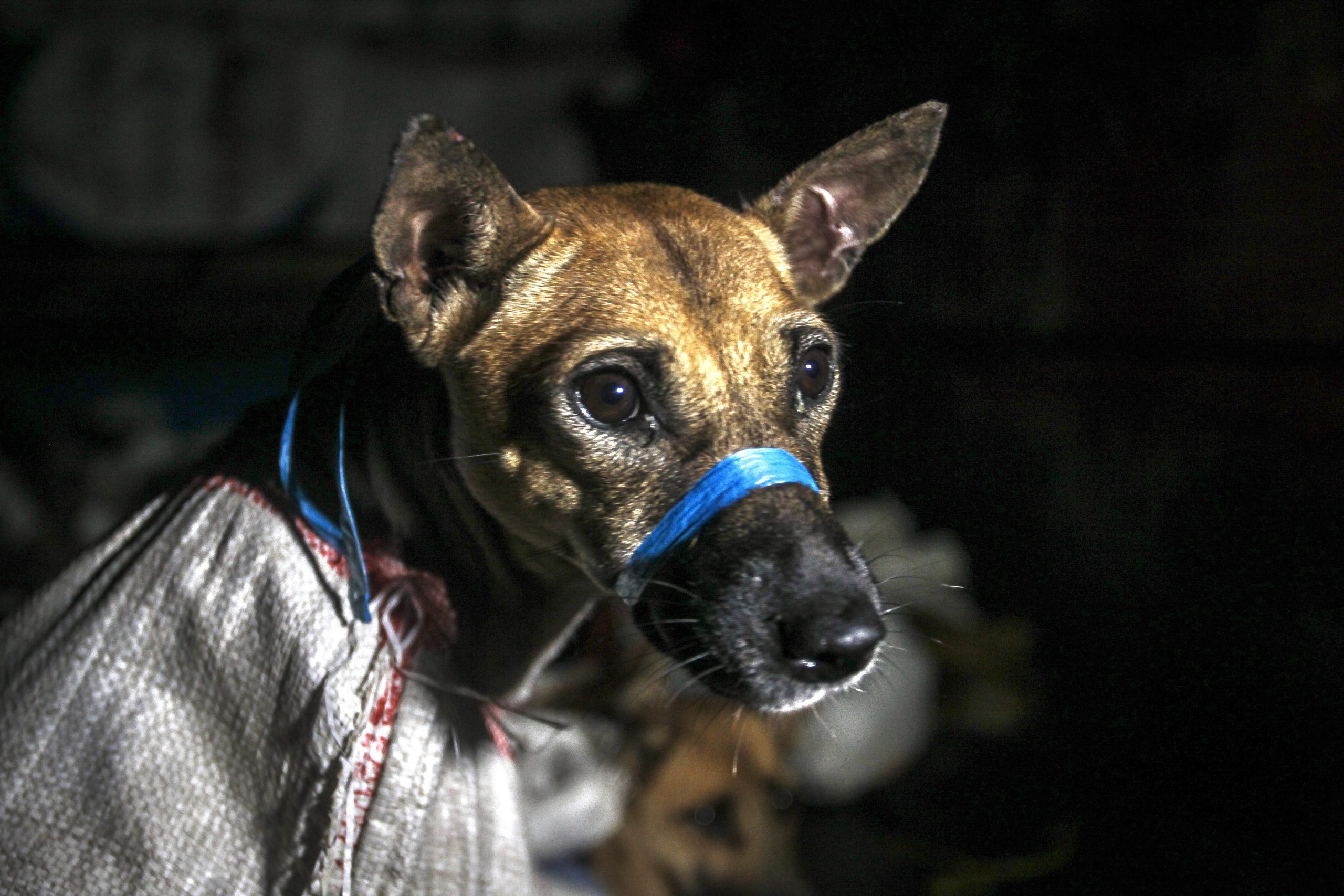 Police in Sukoharjo infiltrated a dog trafficking operation in Java in order to move in on the illegal trader and dog butcher who has allegedly been at the center of the dog meat trade on the island for more than 20 years. He is suspected of coordinating shipments of hundreds of dogs for slaughter every month, and killing an average of 30 dogs every day. Campaigners from the Dog Meat Free Indonesia coalition (DMFI), which campaigns for a nationwide ban on the dog and cat meat trades, were at the scene to help rescue any dogs found alive. 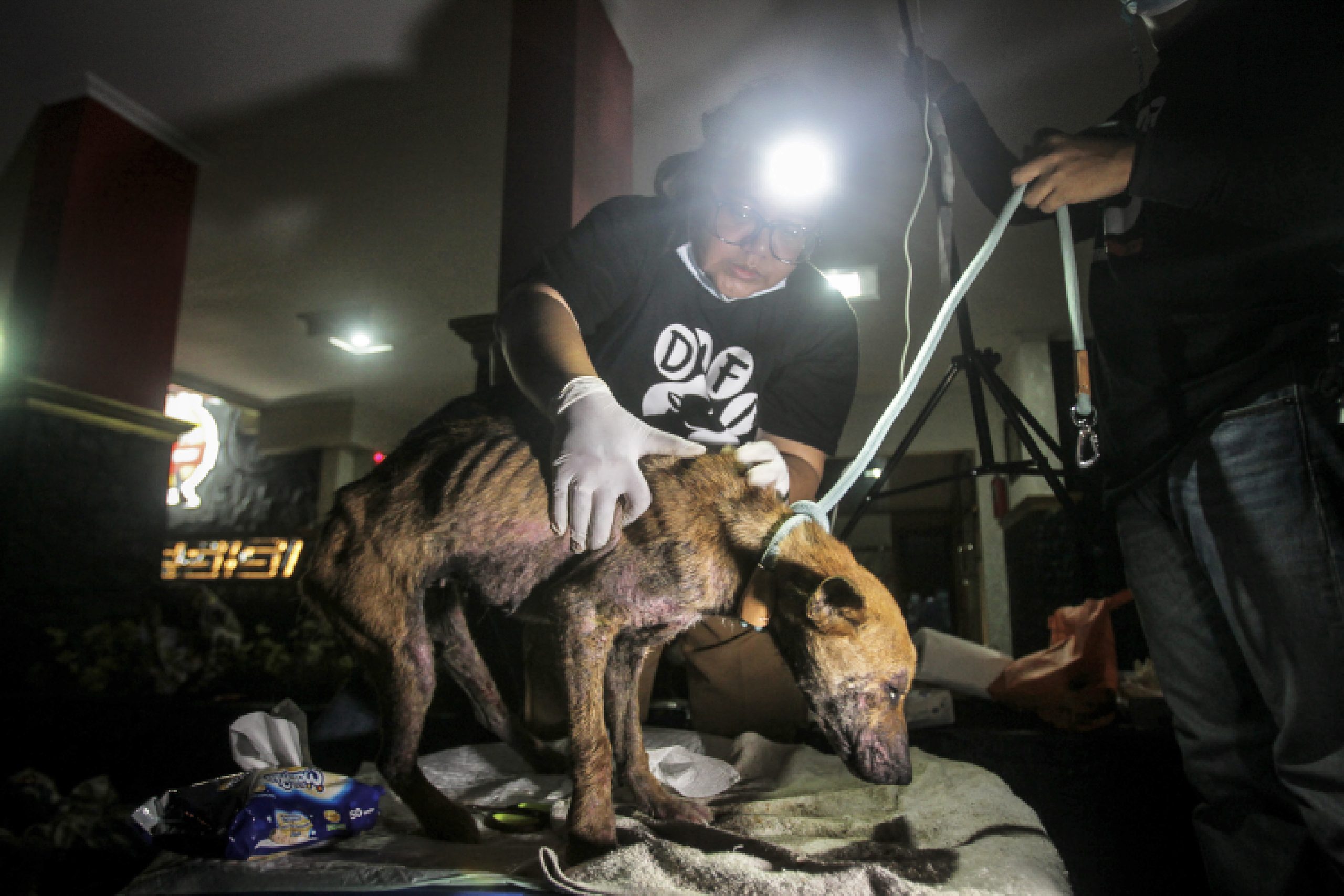 The sting operation took place in the early morning hours on November 24th as the truck loaded with 53 terrified dogs arrived at the slaughterhouse. DMFI campaigners found the dogs tied up in hessian sacks, their mouths tightly bound with string and cable ties. Most of the dogs were emaciated, and less than one year old. One dog had sadly died on the gruelling journey. 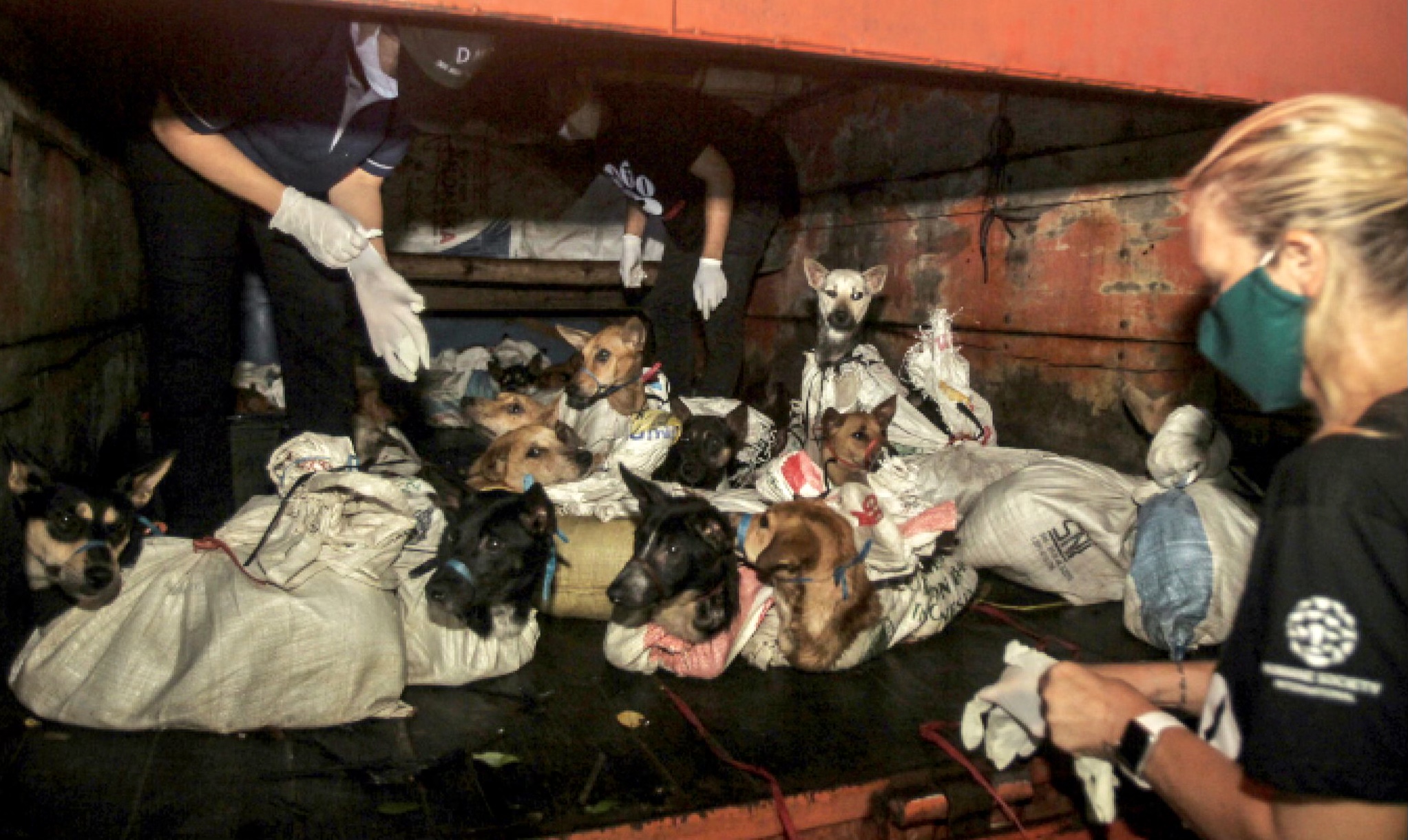 “My heart was pounding in my chest as we approached the truck, because I could hear the dogs’ pitiful whimpering and then saw them all tied up in sacks, their soft muzzles squeezed shut with wire,” said Lola Webber, from DMFI member group Humane Society International, who was one of the first people on the scene. “They were extremely traumatized and frightened. Many of them were still wearing collars, and were no doubt many miles from home, likely stolen pets grabbed from the streets.” 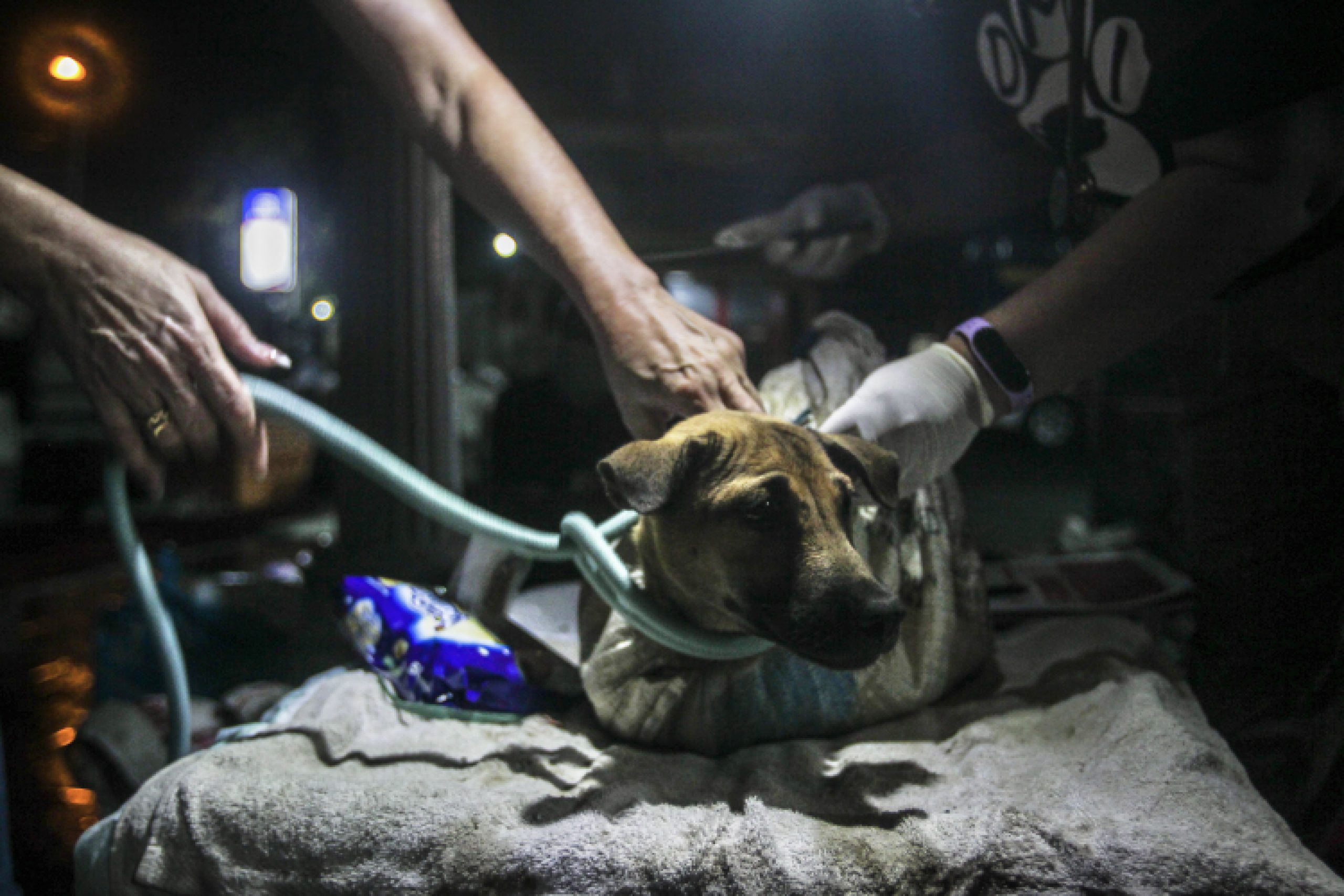 “They have endured the most horrific and terrifying journey, thrown in the back of a truck to be taken to this disgusting and filthy slaughterhouse where they would have been bludgeoned over the head and their throats cut. To think of the fear they must have endured is just devastating,” said Webber. “We got there just in the nick of time because the killing usually happens in the early hours. We are immensely grateful to the authorities for taking action. For those of us who have been campaigning for so long to end this cruel trade, it was a huge privilege to be able to rescue these animals.” 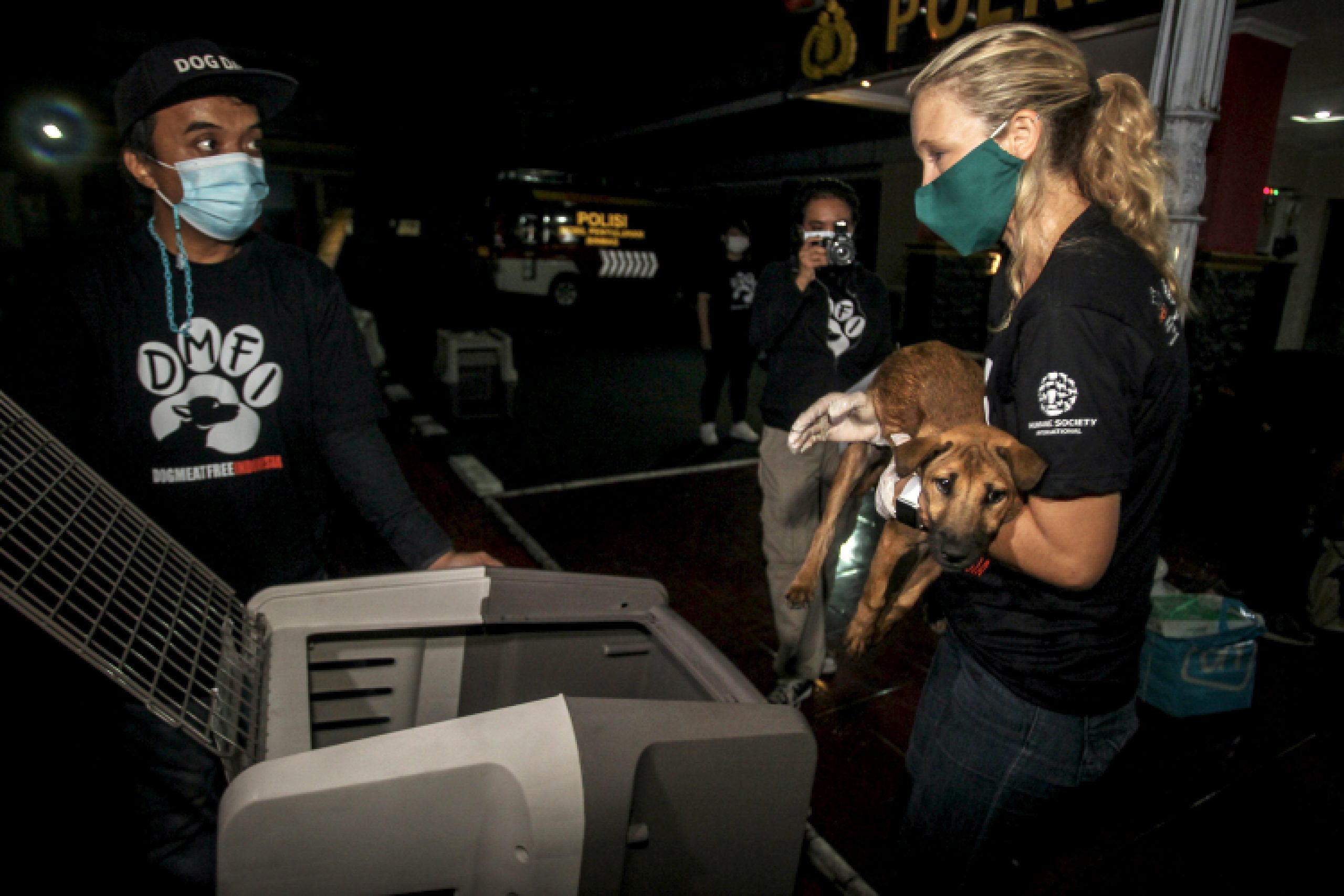 This is only the second major dog meat trade bust by the police in Indonesia, marking what DMFI campaigners hope signals a turning point in their campaign to see the brutal and dangerous trade banned nationwide. Despite a national government pledge to crack down on the dog meat trade, it has been isolated regional governments and regencies that have taken the initiative so far to protect Indonesians from the trade.

Regencies and cities such as Karanganyar, Salatiga, and Sukoharjo have passed explicit bans in their jurisdictions, and DMFI hopes that another arrest and eventual prosecution will send a strong signal to other dog traders that their activities are illegal and will be punished. Last month, a dog trader caught by Kulon Progo District Police was sentenced to 10 months in jail and a $USD 10,000 fine (150 million IDR) after authorities intercepted his truck illegally transporting 78 dogs from West Java for slaughter and human consumption throughout Central Java. 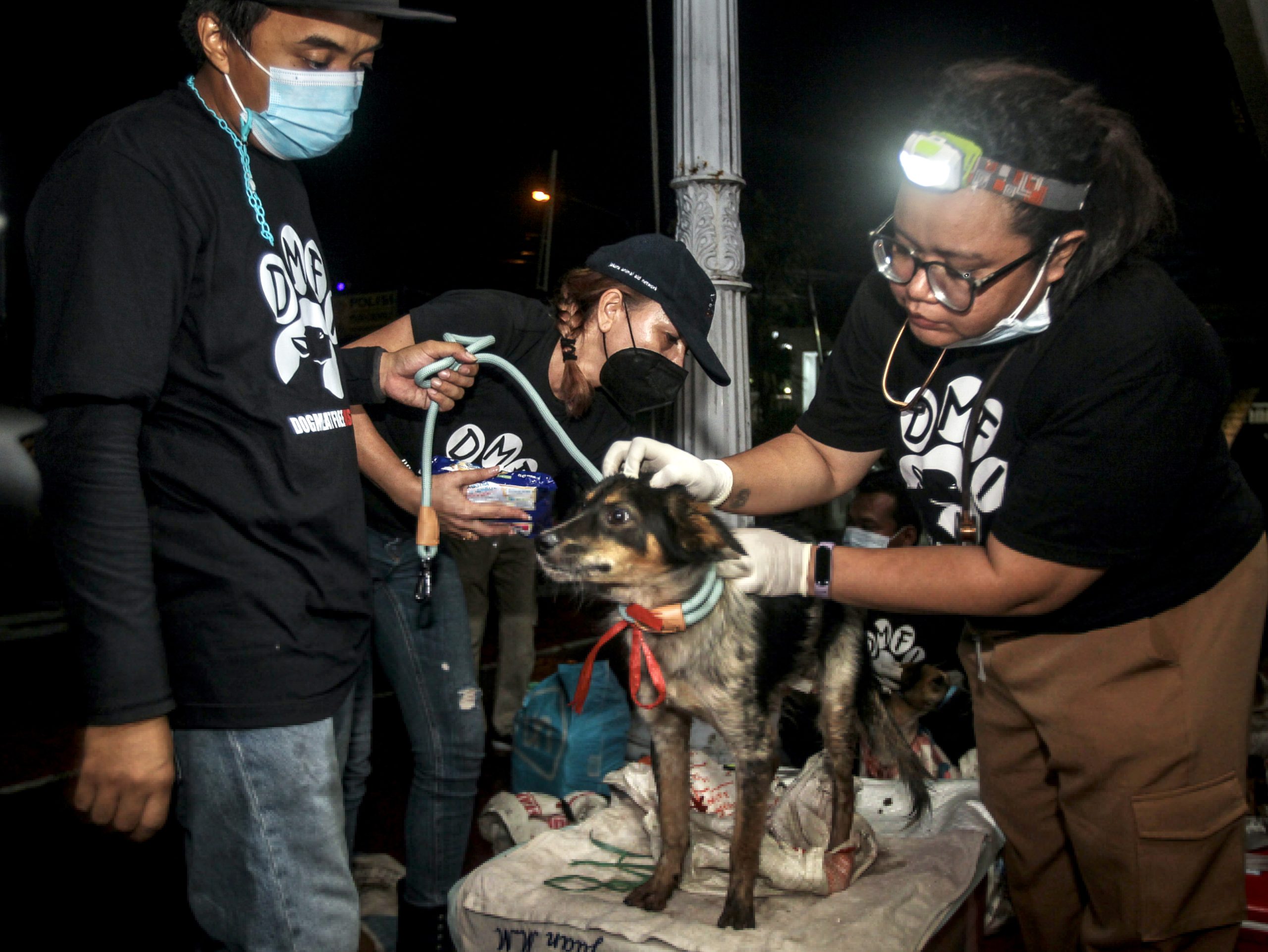 “We receive many complaints about illegal dog meat trader operations. People do not want this trade or slaughter in their communities. Dogs are friends, not food, and the trade is already illegal and is strictly prohibited by Islamic law,” said Mr. Tarjono Sapto Nugroho, Head of Crime Investigation of Sukoharjo police. “Dog meat consumption is considered culture by some, but cultures evolve and so must we. So we initiated this interception and confiscation to protect our communities and to support the Central Javan government’s efforts to eradicate the dog meat eating culture and trade.”

The Dog Meat Free Indonesia coalition has conducted numerous investigations since 2016, exposing the brutal reality of the trade in dogs destined for human consumption. Every month, tens of thousands of these dogs are transported across Indonesia, often crossing provincial borders, jeopardizing anti-rabies measures because of the dogs’ unknown disease status. Many dogs die during this horrific journey from heatstroke, dehydration, or injuries inflicted during capture and transport. 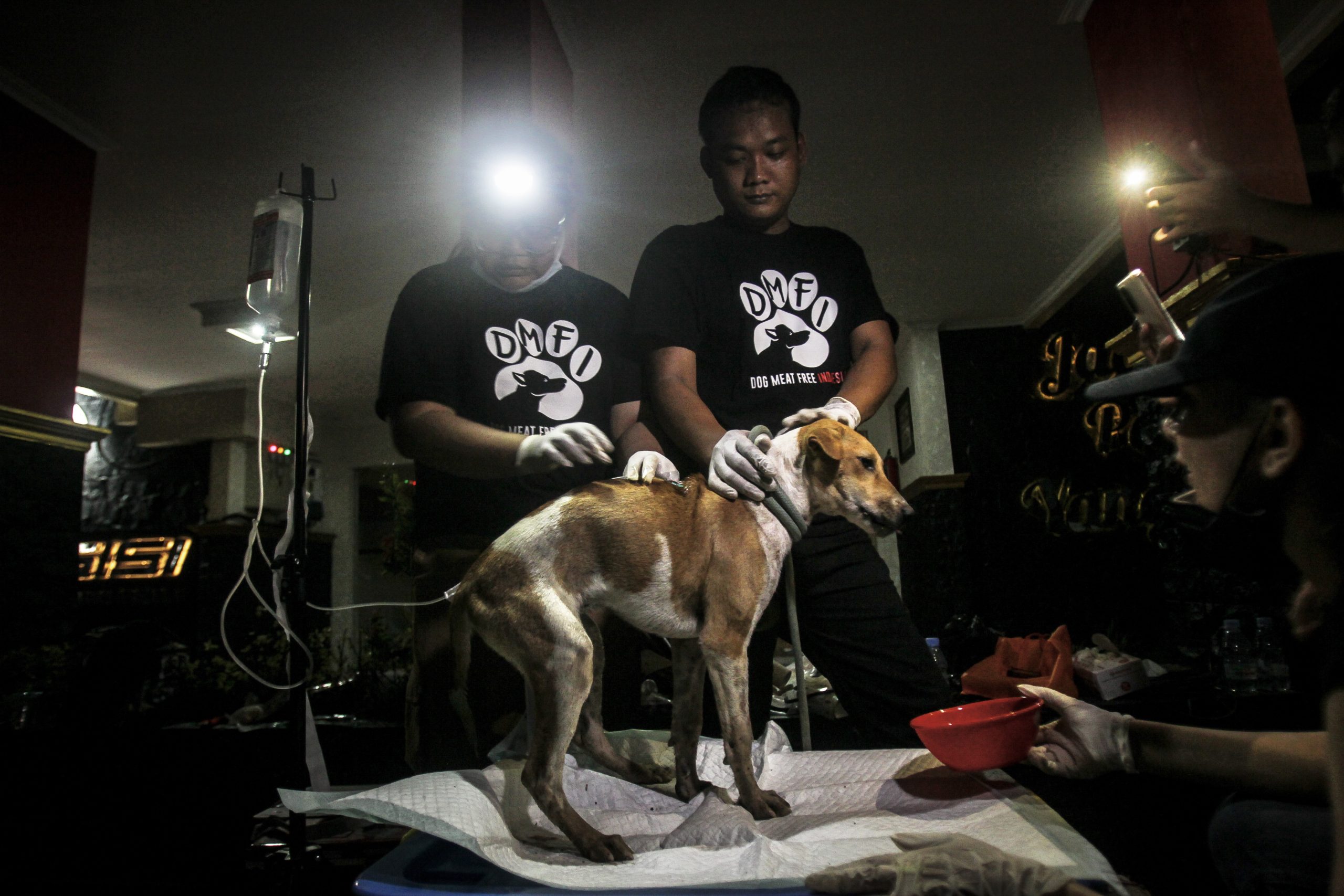 Karin Franken from Jakarta Animal Aid Network, who attended the raid, said: “As well as being unspeakably brutal, it’s easy to see how this trade is a public health danger too. Rabies is a grave concern in Indonesia, and Central Java is one of only eight provinces declared rabies-free, so the cities and regencies here such as Solo, where thousands of dogs are slaughtered and sold in local restaurants every month, are jeopardizing their rabies-free status and the health of the communities by allowing this trade to continue. This raid by the police and a zero-tolerance approach by the authorities is absolutely vital to protect citizens from the public health risk posed by the dog meat trade. We now need other regencies and provinces across Indonesia to follow this lead and crack down on this dangerous and illegal trade.” 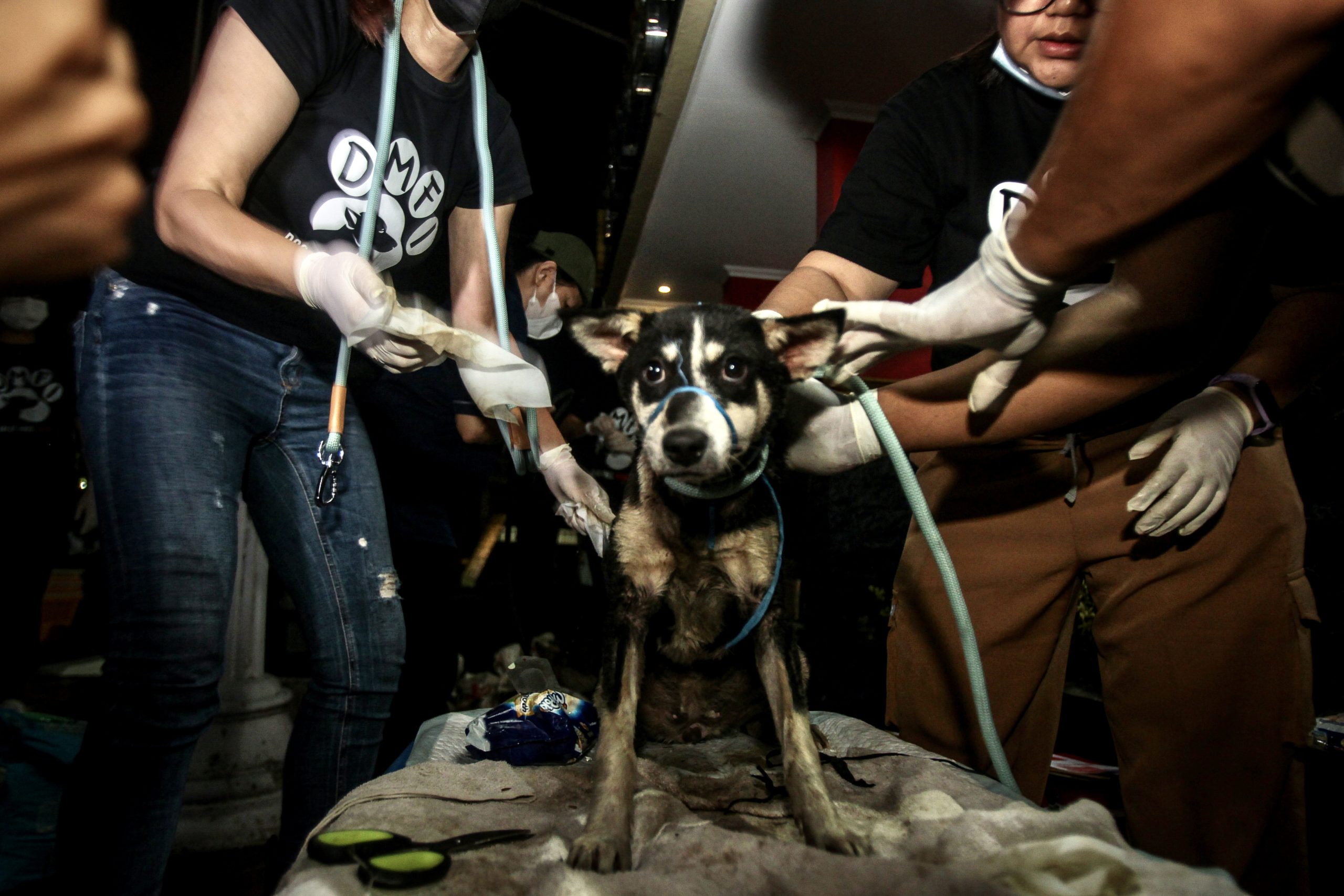 The 53 dogs rescued from the slaughterhouse received emergency veterinary treatment from the DMFI team before travelling to DMFI’s temporary shelter where they will receive loving care in order to get them back to health. The chances of being able to reunite them with their families is likely to be slim, but DMFI will make local appeals. The plan is that some of the dogs will be adopted locally among Indonesia’s passionate dog-loving community, while others will be flown to Humane Society International’s temporary shelter in Canada from where the organization hopes to find them forever homes.

Opinion polls consistently show that the vast majority of Indonesians don’t consume dogs, only a mere 4.5% of the population still does. 93% of Indonesians are in support of a dog meat ban nationwide. 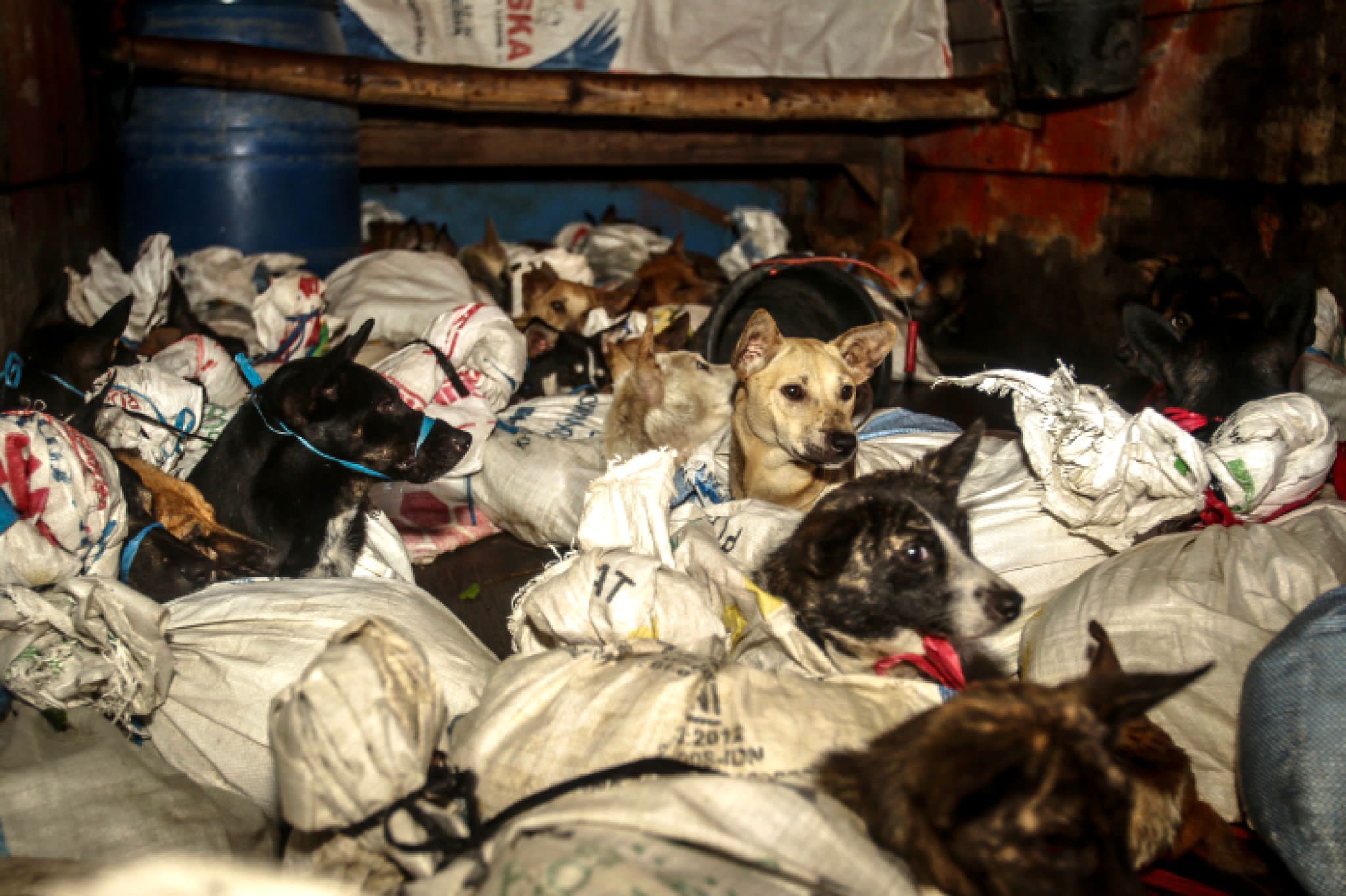 Police confirmed at the scene that they anticipate that the suspect will be prosecuted later this year for violating The Law of The Republic of Indonesia, Number 41, Year 2014, Article 89, regarding Animal Husbandry and Animal Health, with penalties of at least two-five years imprisonment, and/or a fine of at least 150,000,000 Rupiah ($USD 10,500). The police have also pledged to further investigate others involved in illegal operations involving the trade and slaughtering of dogs throughout their jurisdiction.

The chimpanzee in the photo is not the one that was killed over the weekend. WAN is heartbroken to report that a 27-year-old male chimpanzee...
Read more
News

Three juvenile male black bears were thankfully released back into their natural habitat on June 13th by biologists from the Arizona Game and Fish...
Read more

Study after study has shown that people who abuse animals are likely to progress to violence towards humans. That is especially true when it comes...
Read more
News

Prominent beauty brand, Unilever, announced its support today for a global ban on animal testing for cosmetics as part of an ambitious new collaboration with the Humane...
Read more
News

U.S. Court Strikes Down Second Ag-Gag Law In Iowa Deeming It Unconstitutional And A Violation Of The First Amendment