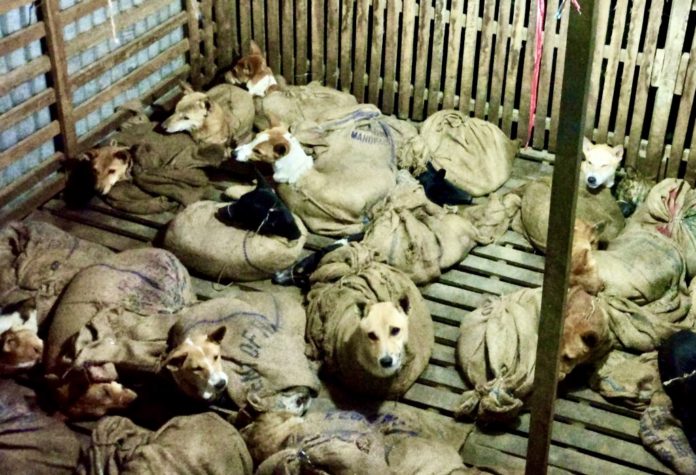 Mizoram, India, has taken the first step towards ending its dog meat trade by amending the law to remove dogs from the definition of animals suitable for slaughter. In a move welcomed by Humane Society International/India, the Mizoram Legislative Assembly unanimously passed the Animal Slaughter Bill 2020. HSI/India now urges the Government of Mizoram to end the cruel and illegal dog meat trade.

The consumption of dogs is prohibited under India’s food safety regulations. However, this is poorly enforced and thousands of dogs each year are illegally captured from the streets or stolen from their homes, stuffed into gunny bags with their mouth stitched or tied, and transported over many days to Mizoram districts such as Aizawl. There have even been reports of dogs transported from neighboring countries such as Myanmar and Bangladesh. The cruel transport and slaughter of dogs violates several provisions of the Prevention of Cruelty to Animals Act, 1960, the Indian Penal Code, and Food Safety and Standard Authority (FSSAI) regulations.

HSI/India, a former member of the State Animal Welfare Board of Mizoram, has been working to end the dog meat trade in Mizoram since 2016, including helping to rescue more than 150 dogs from the brutal trade.

Managing Director of HSI/India, Alokparna Sengupta, said in a statement emailed to WAN, “This is a very welcome and much-needed move by the Legislative Assembly to remove dogs from the definition of animals for slaughter. We hope that this law will now ensure an end to dog slaughter in Mizoram, but in order to shut down the trade completely, we urge the Government of Mizoram to take action to ban the sale and consumption of dog meat too. This comes at a time when the world is facing a pandemic believed to have been caused by the trade in wild animals for consumption. In Mizoram, we have witnessed dogs and other animals being transported and slaughtered in horrific conditions, violating India’s health regulations. So in addition to raising awareness about the illegality of slaughtering dogs for meat, we urge the government to proactively promote the human health benefits of moving towards a more plant–based diet, and reducing and replacing the consumption of all animals.”

Approximately 30 million dogs and 10 million cats a year are killed across Asia for human consumption, with the trade most widespread in: China, South Korea, Indonesia, Cambodia, Laos, Viet Nam, and parts of Northern India. However, Hong Kong, the Philippines, Taiwan, Thailand, and Singapore already have dog meat bans in place.

HSI is one of the leading organizations in the world working to end the cruel dog meat trade. Public education about the cruelty involved plays a key part of the strategy, and support from local governments and communities can also play a significant role in ending the misery these dogs endure in the dog meat trade.

Earlier this week, customs officials with the South African Revenue Service (SARS) intercepted a consignment of rhino horns worth over R23 million at the...
Read more
News