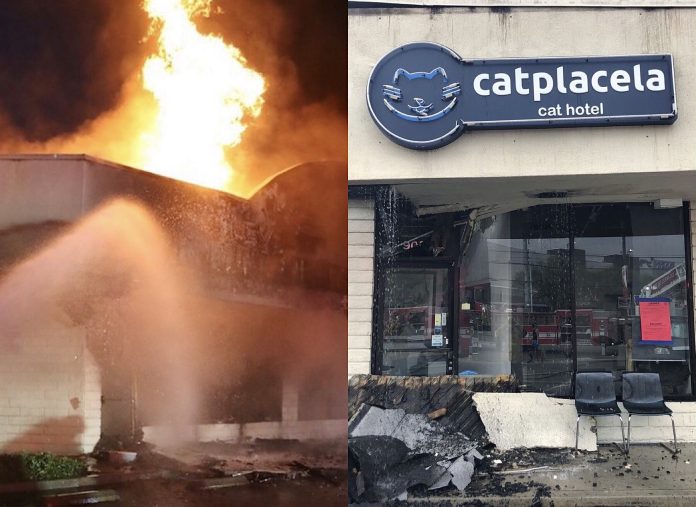 A major emergency structure fire in the Palms area of Los Angeles early Saturday morning tragically resulted in the death of 17 pet cats who were staying at CatPlaceLA, one of the numerous businesses that were destroyed by the monstrous flames.

While two of the cats were safely resuscitated by firefighters and transported to emergency veterinary care, the others were sadly beyond medical help and perished.

WAN talked with Nicholas Prange, a spokesperson for the Los Angeles Fire Department (LAFD), about the devastating incident which is undoubtably causing the pet-parents of the deceased animals and business owner extraordinary pain, suffering, and loss. Prange shared his sorrow for all the parties involved.

As per Prange, 124 members of the Los Angeles Fire Department battled the intense fire which also sent one firefighter to the hospital. The cause of the fire, which took 73 minutes to fully extinguish, remains under investigation.

When questioned about which firefighters were responsible for saving the two cats, Prange explained that it was a massive group effort, with many moving pieces happening at the same time to make the rescues successful.

“We do it for the pets, the people,” shared Prange, who noted that no one is looking for individual recognition. “It is a coordinated effort between fire attack teams, rescue teams, and medical teams.” Something many people may not realize.

As per a statement from the LAFD, none of the involved businesses were equipped with optional fire sprinklers.

While emphasizing the life-saving efforts and teamwork provided by the LAFD teams, Pringe also stressed that these type of fire investigations take time, especially because there were both animals and property involved.

“A lot is destroyed in the fire so investigators need to look for different kinds of clues,” concluded Pringe.

WAN sends its deepest condolenses to all the pet-parents who lost their four-legged family members and to the CatPlaceLA owners and staff, as well as our gratitude to the remarkable first responders and the LAFD members who risk their lives everyday to save others, including the lives of the two cats that were spared from this unfathomable tragedy.

May the precious lost souls Rest In Peace!

On Tuesday, the New Jersey Division of the Fish and Game Council reinstated its controversial black bear trophy hunt. Unfathomably, it will begin this...
Read more

Previous articleArchaic Bullfighting In Spain Claims The Lives Of Nine People; Sadly, The Number Of Bulls Injured Or Killed Remains Unknown
Next articleCall To Action! Support Critical TEAPSPA Bill That Aims To Prohibit The Use Of Exotic & Wild Animals In Traveling Circuses

Maine Medical Center (MMC) is ending its controversial use of live animals in its emergency medicine residency program. Based in Portland, Maine, the medical center...
Read more

Hunter Mitchell is no ordinary boy, at just nine-years-old, he has raised thousands of dollars to help care for an abandoned baby rhino. Osita...
Read more
Load more