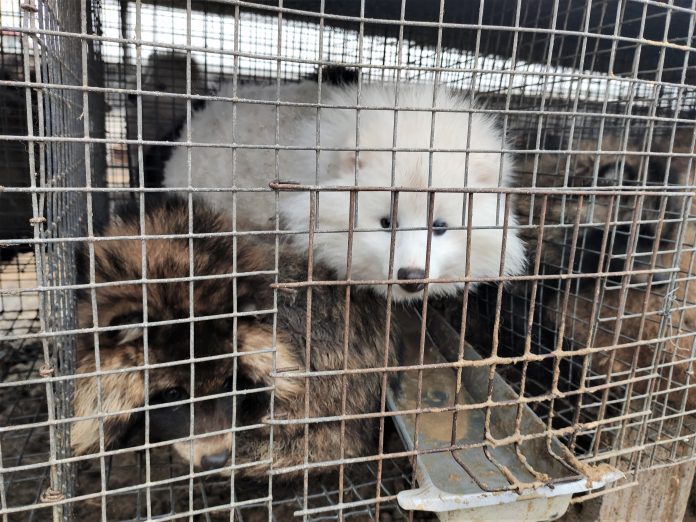 Disturbing video footage released by Humane Society International (HSI) /UK reveals the shocking suffering and painful deaths of thousands of foxes and raccoon dogs on fur farms throughout Asia. Foxes were filmed repeatedly bludgeoned over the head, resulting in catastrophic injury but not instant death; some animals were skinned while still alive. The footage was described by wildlife presenter and campaigner Chris Packham as “a scene from hell.”

HSI investigators filmed undercover footage at eleven randomly selected fur farms in one of the top countries in Asia exporting fur to the United Kingdom. The charity has chosen not to reveal the country in order to protect the identity of the investigators, but says that despite the UK having banned fur farming nearly two decades ago, Britain still allows imports of tens of millions of pounds of fur every year from farms overseas in countries such as: Finland, Italy, Poland, Hong Kong, India, and Thailand. In 2018 fur imports to the UK totaled £70.4 million, including over £5.3 million direct from China alone. HSI estimates this equates to the import of fur pelts from an estimated 2.5 to 3 million animals into the UK each year.

While most British retailers actively choose to be fur-free, sadly, clothes, shoes and accessories using fur from other countries can still be found on sale on the high-street and online. HSI/UK’s latest investigation shows why the British government must end this double standard of allowing the sale of fur to the UK that is outsourced by other countries that are still willing to kill fur-bearing animals.

“Behind the PR spin of the fur trade is the hideous and heartless reality that they don’t want you to see. Raccoon dogs driven mad with boredom in their pitifully small wire cages, foxes repeatedly smashed over the head with a metal bar in front of their terrified cage mates, animals skinned alive so that the fur trade can sell consumers the lie of “luxury.” I am sickened and heartbroken by what our investigators witnessed on these cruel fur farms, but not surprised,” said Claire Bass, Executive Director of HSI/UK in a statement.

“Every designer putting fur on the catwalk, every retailer putting fur on its shop shelves, and every consumer putting fur in their wardrobe, is helping to pay for this shameful misery. It needs to stop, and the UK is now in a unique position to take action by banning fur sales. This, and every investigation into the fur trade shows that fur is not glamorous, it is grotesque, it is cruelty not couture, and it’s time for the UK to stop trading in such horrors,” continued Bass. “In taking control of our markets and laws post-Brexit, the government will have the power, and the moral duty, to send a clear message that the UK will no longer tolerate the cruel fur trade. Cross-party support for a UK ban on fur sales is already strong, and we now need a sign that the government will act.”

HSl/UK leads the #FurFreeBritain campaign for a UK fur sales ban. The UK government has said that it wants Britain to be ‘a world leader in animal welfare’; HSI believes an ideal way to demonstrate that is for the UK to become the first country in the world to ban fur sales.

“I am astonished at the depravity of the fur trade. This investigation is like a scene from hell and anyone who knowingly wears fur should not turn away from watching it. Aside from the unbelievable cruelty of their deaths, these foxes and raccoon dogs will have endured utterly miserable lives. In the wild they would roam and hunt for miles with all the sights and smells of their natural environment,” said TV wildlife presenter and campaigner Chris Packham after he viewed HSI’s footage.

“Natural behaviors like digging are absolutely essential for their mental well-being, and yet on fur farms, they are confined day in and day out in barren battery cages. There can be no place in British shops and wardrobes for fur, not when this is the price that animals pay, so I fully support HSI’s campaign to make the UK the first country in the world to ban this horrific and totally unnecessary industry,” continued Packham.

Previous articleVictory! A Court Order Rules That Yellowstone’s Grizzly Bears Will Remain Protected From Hunters Under The Endangered Species Act
Next articleUrgent! Calling Washington Residents To Add Their Comments Today To Support The Ban On Wildlife Killing Contests Throughout The State

Photo By: International Animal Rescue Thirteen slow lorises have been returned to their home in Sumatra after undergoing rehabilitation at the specialist primate centre in Bogor,...
Read more
News